THE POWER OF PLAY

We live in an age of play dates, where it sometimes seems that you can’t get two children together without parents sifting through overstuffed schedules (“How about three weeks from Thursday?”), plotting travel routes on the GPS, planning kids’ activities as if they’re military campaigns.  When I was growing up in Brooklyn, I lived in an apartment building—dozens of families with dozens of children inhabiting the same four story walk-up—which meant that the play date concept was utterly alien to me.  If I was bored after school, all I had to do was tromp down the stairs and open the front door to find a screaming horde of kids waiting to hurl themselves, often literally, into an afternoon of play.  Summer camp?  Who needed it when when I was permanently enrolled in Camp Ocean Avenue?  Summers, in fact, were the most intoxicating part of the year.  For one thing there was no school.  For another, those three months expanded out toward infinity, the vacation quite literally feeling as if it lasted thousands of years.  Our perception of time, or perhaps our ability to see through the illusion of time, was very different then.  Now I blink and a year passes; then you could stand on a mountaintop in June and never catch sight of September.  July and August were endless countries, far beyond the tyranny of clocks.

My best friend, Bob Izzo, and I were both of the dreaming bent, storytelling came naturally to us, so the other kids often cast us—or perhaps we cast ourselves—in the role of Story Shamans, creating the worlds, the characters, the emotional premises for our collective adventures. (We didn’t realize what we were doing, of course, we just did it:  spontaneously, effortlessly.)  In essence, we were creating what we’d now call Role Playing Games.  Twin game masters, we constructed launching pads from which our rockets of imagination would blast heavenward, passing through dimensional barriers into a multiverse of imaginary worlds.  Weaving ancient spells, we shapeshifted our apartment house gang into cave men, cowboys, Civil Warriors; astronauts, pirates and knights of the realm.  These games would last for days, sometimes weeks; one summer saga went on for months as we acted out a sprawling tale about a band of rebels trying to overthrow a despotic king.  Bobby was the rebel leader, I was the prince, son of the despot, who, depending on my mood (and the plot twists required to keep things interesting) would either aid the rebels or betray them.  (This epic came complete with a musical soundtrack:  whenever he’d be engaged in a life-or-death duel—involving either imaginary swords or fallen branches—our friend Michael Todd would begin humming a score worthy of Bernard Herrmann or Erich Wolfgang Korngold.)

We wouldn’t always create new stories from the ground up, sometimes we’d take off on on a favorite movie (“Let’s play Robin Hood!”), a current book (when I was in the fifth grade, Izzo and I devoured, and then enacted, the James Bond series, except in our versions there were two dashing leads) or a familiar historical saga.  One true story we were obsessed with was the tale of the Alamo.  (What nine year old boy could resist a battle that combined Jim Bowie, Davy Crockett and a desperate lost cause?  I must have read Robert Penn Warren’s book, Remember the Alamo!, half-a-dozen times).  We would reenact, and wildly embellish, that classic last stand over and over.  I was always Colonel Travis, drawing the line in the sand, telling the men that they were free to leave but, if they wanted to stay, they could cross that daunting line and remain with me—to die, heroically (or so it seemed to us then; we weren’t up on historical nuance) defending the fort.

Izzo and I created our own comic books, as well.  Shocking as it may sound to those of you familiar with the pacifist thread in my work, I was crazy for war comics (before I ever read Spider-Man, I was a devoted follower of Marvel’s Sgt. Fury and his DC predecessor, the equally-unshaven Sgt. Rock).  Working feverishly, Bobby and I produced two issues of The Daring Diamond Brothers:  the story of four siblings (one in the Navy, one in the Army, one in the Marines and one in the Air Force) fighting World War II.  Bob and I co-wrote the stories, I drew them (swiping as many images as I could from Fury, Rock, Johnny Cloud and the rest) and we both colored them with all the Crayola passion we could muster.  (In the second issue—titled “Death of a Diamond!”—P.T. Boat Captain Rob Diamond was killed in action and his brothers sought bloody revenge.  Perhaps because we never thought we could top such a masterpiece, that was the final issue of The Daring Diamond Brothers.)

Drawing and comic books were two of my primary passions and, being at heart a solitary kid—more than happy to keep my own company—I’d spend endless hours alone, on the living room floor, creating comics.  Sometimes I’d write and draw my own originals, sometimes—and I have incredibly clear memories of this—I’d take a comic I loved, place it next to me on the linoleum, then get out my paper and crayons and do my best to recreate that cover, line for line.  It was like a meditation:  concentrating on “Bob Kane’s” square-jawed Batman, time dissolved and—absorbed in a dimension of pure creativity, pure play—I was complete.

I bring all this up not for nostalgia’s sake, although the memories are wonderful ones, but because that purity of play is the heart and soul of the writing life—and something easily lost in the pressure cooker of the adult world.  Yes, I’m blessed, beyond words, to be paid for doing something I love, to continue in the role of Story Shaman that Bob Izzo and I first performed all those years ago.  On my best days, when that combination of innocence and imagination has me in its grip, I become less a writer than a channeler; a kid again, happily adrift in a world without time, all sense of self lost in the creative act.  But there are days—sometimes too many of them—when what I do can become a (dare I say it?) job and I look at my work with a weary, and occasionally cynical, eye.  When writing is reduced to merely work, something utterly essential is lost; and, in order to survive, to flourish, I have to, I must, reconnect with that little boy who journeyed to Mars and the Alamo, Sherwood Forest and Camelot.

Last year I made a small poster and taped it to one of the book cases in my office.  On it is a magical formula:  Imagination + Creativity = PLAY.  Those words are accompanied by a picture of Mickey Mouse as the Sorcerer’s Apprentice (as pure an expression of imagination as I’ve ever come across), a spider (the Native American god of, among other things, writing and creation) and a couple of pictures of myself as an exceptionally-happy four year old.  It’s a way to remind myself to remain as innocent, as joyful, as connected to Cosmic Dreaming as that little boy was.  That’s the surest way to get out of a hole when a story I’m working on suddenly shrivels up and dies; when my characters stop talking to me; when editors, mortgage payments, rejections, deadlines and a mailbox full of bills conspire to crush my spirit.  If I listen carefully, I can hear Little Marc’s voice, offering the best advice a writer can get.  “It’s a game!” he says.  “Lighten up!  Have fun!  Play!”

And when I follow those instructions, this is, bar none, the greatest job in any universe. 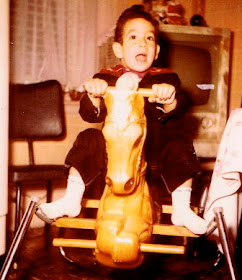