THREE PLUGS AND A PROMISE

As I think I’ve mentioned here before, my son Cody is a very skilled comic book editor, currently working for Devil’s Due, where his Major Project of the moment is a continuation of the cult-favorite Jericho TV series.  Jericho, Season Three:  Civil War is a six-issue mini that comes out November 25th:  the first issue—co-written by Jericho writer/producer Dan Shotz and another of the show’s writers, Robert Levine—continues exactly where the series left off when it was unceremoniously yanked by CBS a couple of years back.  I’ve been privy to the unfolding creative process and I can safely say that, if you’re one of the millions of hardcore fans of the show, you will love this.  The interior art is by Alejandro F. Giraldo.  Below is the first issue cover by Scott West. 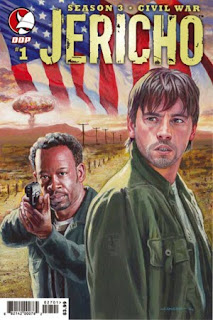 While I’m plugging away, I should also mention that the first issue of Casper and the Spectrals, the Casper update I’m editing for Ardden Entertainment, hit the stores this past week.  It’s a fresh, fun reimagining of the Casper mythos, with a story by yours truly, Brendan Deneen and Todd Dezago, a terrific script by Todd and equally terrific art from Pedro Delgado.  We’ve worked hard to make our Casper a smart, all-ages comic book and I suspect that it will be enjoyed by kids—of any age—with a fondness for the Friendly Ghost. 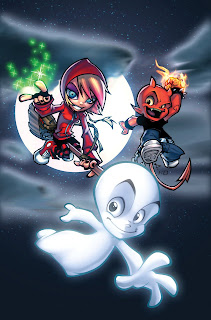 
Speaking of plugs—well, hair plugs—I recently stumbled across a site that may be one of the weirdest I’ve ever encountered on the web.  Yes, I know that’s saying a lot, but just click here and tell me that you don’t agree.  As this essay (one of the few posts from my Amazon Blog that hasn’t vanished into the merciless depths of cyber-space) will attest, I’m a total Shatnerd—but an entire website devoted to Shatner’s hairline?  As Kevin Costner observed in Oliver Stone’s JFK:  “We’re through the looking glass here, people.”


I’ve decided that the time has come to finally write about my long-ago encounters with John Lennon,  so be on the lookout for “Meeting Lennon, Part One,” which will be appearing here before Thanksgiving.   Promise!