My next episode of Batman:  The Brave and the Bold is coming up in a few weeks on Cartoon Network and you can watch a couple of preview clips here.   The episode, called "Scorn of the Star Sapphire," features one of my all-time favorite comic book characters, Green Lantern.  (As I've said before, GL's formula—will plus imagination equals manifestation—doesn't just make for cool stories, it's a wonderful recipe for living our lives.)  The episode, of course, is timed to help build anticipation for the new Green Lantern movie that's coming out in June—and that's also the reason why DC Comics is re-releasing a favorite project of mine, Green Lantern: Willworld:

a surreal, and  fairly whimsical, tale about about the multi-dimensional nature of reality.  (The link above will take you to the original edition, still available over at Amazon.  You can find the new edition here.) 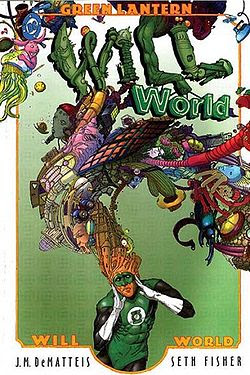 Willworld is one of those stories where, within the context of a cosmic fantasy—it's really more like a children's book than a super hero story—I was able to share my views on life, the universe and everything.  But, as happy as I am with the story, it's the art—by the late, great Seth Fisher—that steals the show.  Seth was a massive, major talent:  the kind of artist who would take the script, funnel it through his outsized imagination and create a visual world that was both completely true to the story's intentions and yet utterly unique—and constantly surprising.

Seth's death, at the age of thirty-three, was a genuine tragedy:  I suspect that, had he lived, he would have become one of the most celebrated fantasy artists around.  If you're a connoisseur of great comic book artwork—and I know you are—check out Willworld.  It's astonishing what Seth manifested with pen, ink, will and imagination.