Let's end July on a note of joy, with our eyes wide and fixed on the heavens.


The Biological Advantage of Being Awestruck - by @Jason_Silva from Jason Silva on Vimeo.

Saw The Amazing Spider-Man the other day and enjoyed it.  Did it blow me out of my seat and make me forget Sam Raimi (and, especially, his classic Spider-Man 2)?  No—but it had enough wonderful moments in it to have me looking forward to the sequel; and it also had Emma Stone—an extraordinary young actress who lights up the screen in everything she does.  Sign me up for the Gwen Stacy spin-off movie!  (I thought Andrew Garfield did an excellent job, as well:  he looked like he was drawn by Steve Ditko.)
***
While we're on the subject of Spider-Man:  Comic Book Resources recently concluded a poll of the 50 Greatest Spider-Man Stories.  I was delighted, and grateful, to discover that my story “The Gift”—which featured the death of Aunt Man (don’t worry, she got better)—came in at #12, while my Harry Osborn Saga (which evolved over my two year run on Spectacular Spider-Man and climaxed in Harry’s death (he got better, too))—was #10.  To say I was completely surprised when Kraven’s Last Hunt was chosen for the #1 spot would be a massive understatement.  Don’t know if it’s deserved—considering that Lee-Ditko-Romita wrote the book on Peter Parker, I’d choose one of their stories for the top spot—but, as I’ve said before, it’s certainly nice to be appreciated.
***
Beginning work on the third issue of The Adventures of Augusta Wind (coming from IDW in November) and Vassilis Gogtzilas has been astonishing me again and again with his brilliantly imaginative illustrations.  Here’s a page from our second issue to whet your appetites. 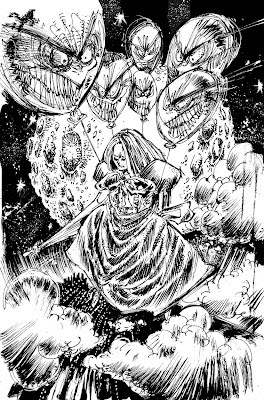 ***
Speaking of astonishing artwork, I’ve got a new project in the works with my old buddy Mike Ploog (who, for my money, is one of the greatest fantasy artists to ever walk the Earth).  Can’t say much about it just yet, but here’s a Ploogian teaser for you.  Beware:  here there by monsters. 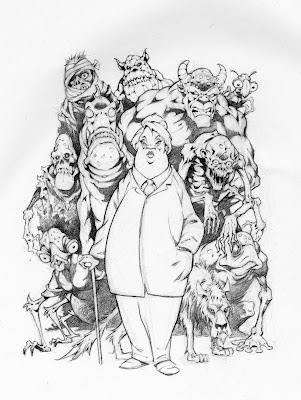 
"The book that I shall make people read is the book of the heart,
which holds the key to the mystery of life."
Avatar Meher Baba
Posted by J.M. DeMatteis at 8:19 AM 0 comments