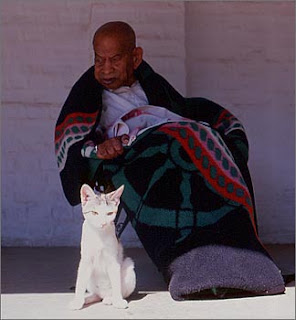 I got married for the second time in 1993 (lucky for me I got it right that time and it’s been a long, happy union):  Diane and I were deep in a cloud of love-intoxication, celebrating our marriage every chance we could get.  We didn’t go off on one honeymoon that year, we went on three.  The first was the classic:  Niagara Falls.  Spending July 4th in a park while glorious fireworks exploded just over our heads was like something out of a Bradbury story.  The third honeymoon took us to Hawaii for an enchanted two weeks.  But it’s the second honeymoon that concerns me here, the one that took us to India, to the ashram of Avatar Meher Baba.

My son, Cody—who was thirteen at the time—came along with us.  I’d taken him to Meherabad—the name of Meher Baba’s Ahmednagar compound—in 1988, when he was eight (despite his age, Cody handled things like a seasoned traveler), and I’d taken Diane in 1990 for a journey that included a memorable visit to the Taj Mahal; but this was the first time the three of us went on pilgrimage together, a beautiful opportunity for our new family to bond.

Our three weeks at Meherabad were perfection.  We encountered old friends and new, there was family time and precious time alone with God, sitting in Meher Baba’s Tomb (for me, the spiritual nexus of the universe), drinking in the deeps of His Silence.  Love is the core of Meher Baba’s message and love was the core of that ’93 trip:  love that came pouring through in both familiar and astonishing ways.  Most astonishing of all was the love I encountered in the form of a hunched-over old man named Mohammed Mast.

Masts, according to Meher Baba, are men and women who, to the objective eye, may appear mad:  in rags, living on the streets, perhaps in filth, confused, angry, incomprehensible; but to the eye of the Avatar, the masts aren’t mad at all.  They are, as Baba explained, God intoxicated.  Souls that have ascended the inner planes of consciousness; many of them getting stuck there, needing a push from the Master to move them along to the next destination in their journey back to the God we all are.

Meher Baba spent many years, traversing thousands of mile, in search of authentic masts; giving each one an inner push along the path and using their spiritual power in His work for humanity.  (Much of this is documented in William Donkin’s 1948 book The Wayfarers.)  No mast spent more time in Meher Baba’s orbit than Mohammed. To quote Donkin:  “Mohammed is by birth a Hindu, a potter by caste...and his real name is said to be Tukharam Chawan.  He seems to have had a wife and two children and when he became a mast, he left his home...and went to Bombay. It was in Bombay that he came to be called Mohammed, by Muslims who held him in respect.”  He spent several years wandering in Bombay before coming into Meher Baba’s orbit—brought to His ashram in Rahuri—in 1936.  Mohammed was eventually moved to Meherabad, where he spent the rest of his days.

According to Baba, Mohammed was established on the fifth plane of consciousness, the mental plane, and he continuously experienced the presence of God.  I was once told that Mo could see into every mind on Earth, that, among his other abilities, he was able to exist in two places at once; but a mast’s powers are just window dressing.  What mattered about Mo was his heart—not that I (often dense beyond belief) realized it at first.

On my previous trips to Meherabad (the ’93 pilgrimage was my sixth), this ancient hunchback with the fiery eyes and unpredictable temperament had, frankly, terrified me.  I didn’t like the idea of anyone peering into my head (too many shadows lurking there, I suppose) and so I did my best to avoid Mohammed at all costs, scooting by his quarters in Old Mandali Hall as fast as I could.  Oh, I’d mutter “Jai Baba, Mohammed” if I passed him sitting on the porch, but I kept moving—the better to keep Mo from gazing into my soul and finding me wanting.  (In retrospect, these thoughts had nothing to do with Mo, everything to do with my own childhood programs of unworthiness.)  I remember being in India in ‘88  and walking into Mandali Hall with a close friend.  It didn’t take long for Mohammed to start shouting at us (in Hindi.  I had no idea what he said; for all I know it could have been a blessing) and it took even less time for the two of us to get our asses out of there.

But 1993 was a very different kind of encounter and it wouldn’t have happened without a wonderful man named Eric Nadel—friends called him Erico—who was Mohammed’s caretaker.  Erico had come from the States years earlier to live in Meherabad and he’d been with Mo for so long that some thought he was becoming something of a mast himself.  All I know is that Erico had an extraordinary intellect and a huge heart; always warm, welcoming and utterly genuine.

One day Cody and I were walking through the compound and encountered Erico and Mo.  Erico asked Mohammed to bless Cody, which the old mast did by slapping a large hand on Cody’s head.  “Come by tomorrow morning,” Erico told us, “and help me feed Mohammed breakfast.”  Despite my trepidations about Mo—and perhaps urged on by the glow of honeymoon love—I agreed.  I also thought this would be an experience for my son to remember.  How many opportunities does one have to share breakfast with a God-intoxicated mast?

We arrived on the porch of Old Mandali Hall, father and son together, and, as we settled in, Erico asked me to wash Mohammed’s face.  Wait, wait, I thought, I’m supposed to touch this guy?  Will he even let me?  What if he starts yelling at me again?  I wrestled down my panic and took a deep breath; walked over to the sink and began to gently wash Mo as instructed—not with a cloth, but with my hands.

And the most extraordinary thing happened, one of the most profound, inexplicable and sacred experiences of my life.

When my palm brushed Mohammed’s cheek I understood instantly who and what this man was—and how wrong I’d been to fear him for so many years—because what I touched wasn’t flesh:  it was love.  No, make that Love with a capital L.  This mast, this man, whose soul was focused, with one-pointed intensity, on Meher Baba, was composed of Love.  Please understand that I don’t mean this metaphorically.  Every iota of Mohammed’s being was literally composed of love.  He breathed love.  His heart beat love.  His blood flowed love.  But to talk about hearts and blood is to limit the infinite.  In that moment it seemed to me as if Mohammed’s body wasn’t even there.  He wasn’t physical at all, he was energy:  dancing atoms of love that vibrated beneath my hands, flowing from Mo to me, bringing me to a state of quiet ecstasy.  This was Meher Baba’s Love in as pure a form as I’ve ever encountered, radiating in, through, and as Mohammed.  And yet there was nothing dramatic in the experience, nothing overwhelming:  it was gentle, natural and pure.

When I finished—and, really, I could have stayed there all day—Cody sat down at a table beside Mo and, following Erico’s example, fed the old mast, slowly and gently.  I, meanwhile, sat off to the side like a love-struck schoolgirl, staring at Mohammed, hoping for a glance, a momentary look, in my direction.  Every time he did, it was all I could do not to sigh.  I had touched embodied love and I was smitten:  more than that, Mo and I were bonded forever.  (I eventually came to understand, in ways I can’t explain here, that Mohammed and I had known each other inwardly for many years, probably through many lives.  Today, nine years after his death, he walks beside me still.)

When we were done, Erico told me something that touched my already-pierced heart even more.  Many fathers and sons, he said, had come to visit Mo over the years and some had been chased away by the old mast, no doubt in his inimitable fiery fashion.  It could very well be that in rejecting them, Mo was actually blessing them—I have no way of knowing—but the feeling I had that morning was that, in accepting us, in allowing me to wash him, Cody to feed him, Mohammed had gazed deep into the core of our father-son relationship and smiled his approval.

When we were done, Cody and I wandered back to the Pilgrim Center where my new bride was waiting for us.  “Diane,” I said, “I have something to tell you.”  “Yes?”  “I’m in love with Mohammed.”  Many wives, especially those on their honeymoon, wouldn’t know how to react to this information, but Diane understood instantly, smiled and said, “That’s good.”

What a perfect honeymoon gift, to be shown love is such a pure form, radiating from another human being; and I see now that that Mohammed’s love—or should I say Meher Baba’s Love shining through him—wasn’t just a gift to me, it was a gift to my new marriage, to my relationship with Cody, to the daughter who would be born a little over a year later.  Perhaps the greatest gift Mohammed gave me was an unforgettable reminder that, when we strip away the illusions of our individual identities, we’re all composed of love, all God under the skin.

Mohammed Mast died in 2003, but, to this day, all I have to do is recall the feeling of his face beneath my palm, the vibrating, cosmic force that he was, and I’m back on that porch in India.