THE STORIES THAT NEVER WERE

I started thinking about my "might have been" files this morning when I came across a proposal I did in 2013 for the classic Archie Comics superhero, The Shield.  My Life and Times of Savior 28 collaborator, the brilliant Mike Cavallaro, and I had done a Shield back up strip as part of Dean Haspiel and Mark Waid's revival of The Fox (I actually wrote the final issue of that series) and editor Paul Kaminski—who was a genuine pleasure to work with—asked us to spin the Shield off into his own mini-series, with Terry Austin lined up to ink Mike's work.  I came up with what I thought was a strong concept and, after some discussions with Paul, put together a proposal/outline.  As sometimes happens, I kept getting notes that required shifting the story to the left here, to the right there, and, at one point, I completely reworked the concept from the ground up.  (Many of these notes didn't come from Paul—who enthusiastically supported our work from day one—but from elsewhere on the Archie staff.)

For reasons I was never clear on, the series was abandoned.

You can read my original outline—and view a fantastic piece of promo art Mike put together—below.  I think it would have made for a very powerful story and, perhaps, somewhere, in some parallel universe, our Shield series made its way out into the world.

I may dig into the files and find more "stories that never were" but, for now, enjoy "American Nightmare." 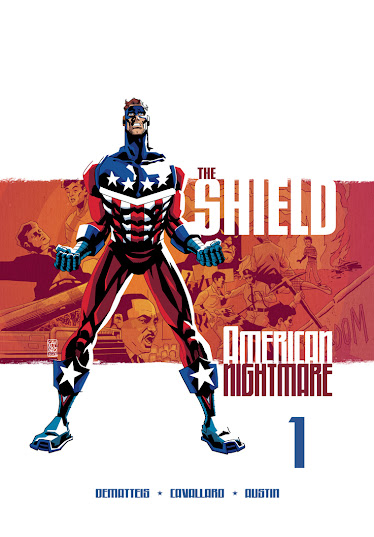 Begin with the Black Tom explosion that killed Tom Higgins, then jump to big action sequence of the Shield in action at the tail end of War Two—also establishing the Eraser as a soldier-for-hire, willing to work for Nazis, or anyone else, for the right price...then:

It’s VJ Day.  The war is over.  Joe Higgins marries Andrea Horowitz:  they grew up in the same neighborhood, he’s loved her for years.  Joe still plans on being the Shield but he naively believes that the end of the war is the beginning of a new American dream.  In the next year he finds a happy balance between his identities.  Andrea—like the spouse of a policeman—always worries—but still counts herself blessed.  Soon, they have a son, William.  Joe and Andrea have never been happier.  Two years go by.  Then...

1948:  ...there’s a devastating attack on the Higgins house.  (Masterminded by the Eraser.  This will be a major action beat.)  When the smoke clears...

...Andrea is dead and Joe has just managed to save his boy.  (The Eraser escapes,)  Joe’s utterly devastated, heartbroken.  Convinced now that he can never have a normal life, that his son will never be safe with him around, Joe—with the FBI’s help—hands the boy over to another family to raise anonymously.  He buries his life as Joe Higgins and fully embraces life as the Shield.  The dream of a happy family, prospering in post-war America—being lived out by returned soldiers all across the country—can never be his.

But someone is going to pay for what’s been done. Joe Higgins may be dead, but the Shield is going to find the Eraser and make the bastard pay.

American Nightmare #2:
The Shield—half mad with grief—goes out to hunt for the man who killed his wife; becoming wild, reckless, out of control...his handlers at the FBI worried about him.  (Perhaps instituting a plan to terminate him if he gets out of control?)  Joe manages to break the Eraser’s international organization, but, for all his efforts, Shield can’t find the Eraser himself.  The Bureau tells him it’s time to let go and move on and, to their relief, Shield agrees; but, in his heart, he knows he’ll never give up.

Time passes:  Shield encounters the Eraser several more times down through the years—from the fifties into the early sixties (each encounter playing up some pivotal moment in our history—Korea, the space race, the Cuban Missile Crisis, etc.) but can never stop him.  The Shield, by now, has erased any trace of his civilian ID.  Doesn’t even like people calling him Joe.  He’s a mask and a costume, a human weapon, not a man.

Throughout this, we intercut with young William, who grows up in a loving family—but always misses parents he doesn’t know but still remembers; especially the father who, he believes, is alive out there.  But time is cruel and memory dims more each year.  (I’d also like to contrast Shield’s involvement with these pivotal world events with William’s:  the “civilian” POV vs. the superhero POV.)  Then it’s...

1963:  The Kennedy assassination.  (And perhaps the Shield is in Dallas?)  The world in chaos. Nuclear devastation always a heartbeat away.  The public is questioning authority in a way it never has before—and people are even questioning the need for a being like the Shield:  Is he a dangerous weapon in the hands of government fanatics?  A super powerful lunatic who’ll turn against them?  There are some conspiracy theorists who even claim the Shield was involved with the assassination itself.

The Shield, too, is questioning his own role.  What good can he really do in a world spiraling out of control?  Did he, Joe wonders, make the right choice all those years before when he left his son and lost himself inside the costume?  In the winter of ‘64, he decides to contact William—to be a man again, not a mask—and reach out to his son.  That’s when...

...the Eraser—who will not allow Joe to reconcile with his son, the very thought maddens him—springs a TBD trap:  Joe is caught.

We open with a huge, and brutal, action beat as the captured Shield breaks free.  He and the Eraser go at it, Shield desperate to make this animal pay for killing Andrea; but Joe’s own rage makes him sloppy and we end with the Shield plunged into suspended animation:  body frozen, mind awake.  Tormented and tortured by the Eraser who—despite many opportunities—refuses to kill the Shield.  (We’ll learn later that, for all the hate in his heart, Tom Higgins still loves his son, in his own warped way.)

Out in the world, everyone assumes the Shield is dead (the Eraser actually staged Joe’s death, even planted a convincing corpse, thus “erasing” the Shield from existence).  William is recruited by the FBI.  The Shield Formula, we learn, only works with a genetic match and the world needs a new Shield.  William agrees...

Intercut between William taking on the mantle of the Shield through the turbulent 60’s and 70’s (again, playing his beats out against the political lunacy of the day) and Joe’s nightmare at the hands of the Shield.  As William rises, taking, with astonishing grace, to the life of a hero, Joe falls into madness.  (Instead of physical torture, I like the idea of the Eraser using a machine that allows him to enter into Joe’s consciousness, literally becoming the enemy within.)

Joe, unable to bear the pain, has a complete psychological break and retreats into fantasy:  a life where his wife never died, where he raised his son, where they lived happily ever after—but, even there, in fantasy, the Eraser appears, repeatedly, to destroy the dream.  Joe experiences his loss and pain again and again and again.  (This will, again, play off life in post-war America, where so many returned soldiers moved to the suburbs to live their “ideal” lives—that, under the surface, weren’t always all-that ideal.)

We end, in the early 1980’s, the Reagan years—with William finding the TBD clue that tips him to the fact that his father is still alive and out there...somewhere.

American Nightmare #4:
The search for Joe, leading to his rescue by William.  But Joe has been driven batshit crazy by his ordeal and there’s a battle between the two—during which the Eraser once again escapes—before the son subdues the father and, with FBI aid, gets Joe much-needed psychological help.  It takes two full years in a top-secret government facility for Joe to take the first tentative steps back to sanity...and life.

William is intimately involved in Joe’s long recovery, but, even when he’s “cured,” Joe—paralleling many Viet Nam vets, who dealt with similar issues in the 80’s—has got a massive case of PTSD.  He doesn’t want to put that damn costume on again, doesn’t want to go back out there into that insane, and dangerous, nation.  “You did a good job, son.  You’re a better Shield than I ever was.”  William, though, is done.  He’s proved his point and, more important, he has his father back.  “You have to do it,” William tells his father.  “You’re the Shield.  All I ever did was emulate you.  Became the man I always knew you were.”  Joe resists, but, before a decision can be made...

...there’s an assault on the complex where Joe has been recuperating. Another huge action beat.  It’s the Eraser and a horde of TBD Red Circle bad guys at his command.  Like it or not, the Shield has to come back now.  Father and son suit up and, side by side, go into battle.

American Nightmare #5:
Joe and William, two generations of Shields, take down the assault team...and go after the Eraser...

...leading to the revelation that Eraser is Joe’s father, William’s grandfather, Tom Higgins.  We learn how Tom survived the Black Tom explosion in a demented state (but transformed by his formula into something more-than human):  angry at the country that branded him a traitor, at the son who “stole” his work and glory.  Joe nearly goes mad again, overwhelmed by the knowledge that his own father, the man he worshipped, is responsible for killing Andrea.

In a blind rage, Joe nearly murders the Eraser—and it’s William who stops his father from crossing that line—doing something unworthy, not just of the Shield, but of the man behind the mask.  The father collapses, weeping, in the son’s arms.  Eraser is taken off to prison.  (And, I’m not sure how, but it would be very cool if his own memories are erased during the battle, leaving him lost in the fragmented corridors of his own mind.)

In the end, Joe reluctantly takes up the mantle of the Shield again.  William goes off to forge his own path (or perhaps, in some way, joins his father in the fight...?).  But, far more important than that is the fact that these two wounded souls have healed their rift.  They’re family again, after so many long and painful years.

We end on the Eraser, locked away, lost (as Joe was, in his suspended animation) in a state of absolute madness.  Or perhaps he, too, is living in a fantasy where the Black Tom explosion never happened, and he’s with his wife and young son, living the American Dream...