This week Marvel released a new Epic Collection that features some stellar Amazing Spider-Man stories from David Michelinie, as well as the first part of my run on the book (with the great Mark Bagley).  So happy to see these stories in print after so long.

I'm hoping that next year—which will see the celebration of Spidey's 60th anniversary—will finally bring a collection of my two year stint on Spectacular Spider-Man with Our Pal Sal Buscema. Fingers crossed!

Speaking of Spider-Man:  Work is continuing on the upcoming Ben Reilly: Spider-Man mini and I'm having a blast collaborating with David Baldeon, Israel Silva, and our editor Danny Khazem.  I'm delighted to be hanging out with my old friend Ben again and if the readers have half as much fun reading this as I'm having writing it, the series should be a success.  (You can see a preview of the first issue, along with some commentary from yours truly, right here.)  Once again:  fingers crossed!, 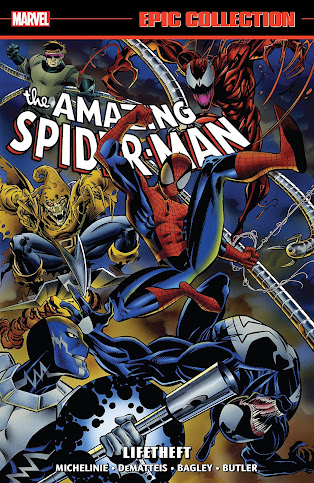