On television they're trotting out the Christmas classics, from The Grinch (he's a mean one, isn't he? Until he's not) to It's A Wonderful Life (yes, I still cry every time I see it) to seemingly-infinite versions of A Christmas Carol (my favorite, as you probably know by now, is the 1951 version starring the incomparable Alastair Sim).
Here at Creation Point we have a long-standing Yuletide tradition, a short Christmas tale of mine called The Truth About Santa Claus—offered annually as a kind of cyber Christmas gift, my way of wishing all of you who visit this site the happiest of holidays and the most magical of Christmases. I offer it again this year, along with three wonderful illustrations by my friend and Edward Gloom Mysteries collaborator Vassilis Gogtzilas. So grab a plate of Christmas cookies, pull a chair up close to the fireplace and enjoy.

He’d been thinking about it for days—ever since he heard Big Mouth Jenny Rizzo announce it on the school bus—and he didn’t believe a word of it, not one word. (Well, maybe ONE.) But Cody had to be sure, absolutely, positively sure— 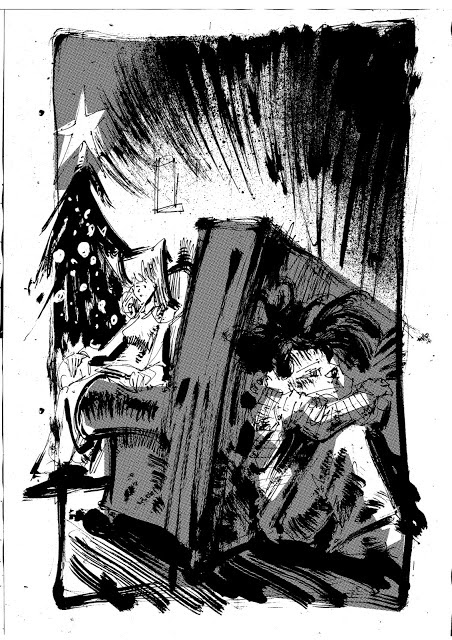 That didn’t make sense. If there WAS no Santa Claus, if his mother was the one who bought the presents, wrapped the presents, stacked them under the tree, then how come she hadn’t done it? How come she wasn’t awake RIGHT NOW arranging them all?

He got scared. Maybe there wasn’t going to BE a Christmas this year. Maybe Mom had lost her job and they didn’t have any money and so she COULDN’T buy him any presents and—

It was coming down and coming down and COMING DOWN all across town, whirling and whipping, spinning and gyrating, out of the night sky. Glowing so brightly that it almost hurt his eyes to look at it. And Cody saw that it certainly wasn’t snow, and it absolutely wasn’t rain, it wasn’t ANYTHING he’d ever seen before. But each drop, no...each flake, no... each BALL of glowing WHATEVER IT WAS, seemed to pulse and spin, soar and vibrate, as if it were alive.

And the stuff, the magical WHATEVER IT WAS (and he knew now that it was magic. He just KNEW), wasn’t collecting on the streets, wasn’t piling up on the rooftops. It was MELTING INTO (that’s the only way he could put it: MELTING INTO) every house (no matter how small) and apartment building (no matter how big). 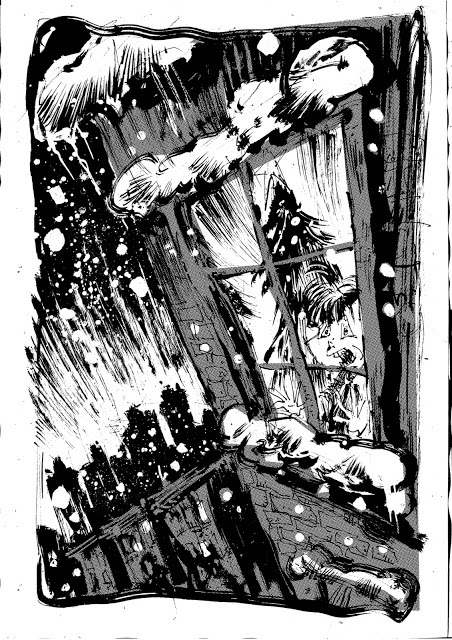 And there it was: coming RIGHT THROUGH THE CEILING of Apartment 3F, HIS apartment, swirling, like a tornado of light, around the chandelier and then down, down, down—

At first he almost yelled out a warning, “Mom! Wake up! MOM!” But something made him stop.

Watched as the light-tornado wheeled around his mother, so fast, so bright, that he could hardly even SEE her. But he COULD see her. Most of her, anyway.

The light poured in through the top of her head, through her eyes, through her chest, through her toes. It lifted her up—still sleeping!—and carried her out of her chair and across the room. And as she floated—

Her hair became white, her nose became red, her belly ballooned like the most pregnant woman in the history of the world. Her feet grew boots, her head grew a hat, her nightgown grew fur. An overstuffed sack sprouted, like a lumpy angel’s wing, from her shoulder. And then—

AndthenandthenandTHEN, it wasn’t his mother there at all, it was him, it was SANTA CLAUS! STANDING RIGHT THERE IN CODY’S LIVING ROOM! Santa Claus who, with a laugh (exactly like the laugh Cody always knew he had, only better) and a twinkle in his eyes (exactly like the twinkle he’d always imagined, ONLY BETTER) reached into his sack and pulled out package after package, present after present, and placed them, carefully, like some Great Artist contemplating his masterpiece, under the tree.

When he was done, Santa Claus stood there, grinning and shaking his head, as if he couldn’t BELIEVE what a beautiful tree this was, how wonderful the presents looked beneath it. As if this moment was the greatest moment in the history of Christmas, as if this apartment was the only place in all the universes that such a Christmas could ever POSSIBLY happen.

He turned slowly. So slowly Cody couldn’t even tell at first that he was moving at all. And—slowly, SLOWLY—those twinkling eyes, that Smile of smiles, fixed itself on the two boy-eyes peering, in wonder, over the top of the couch. 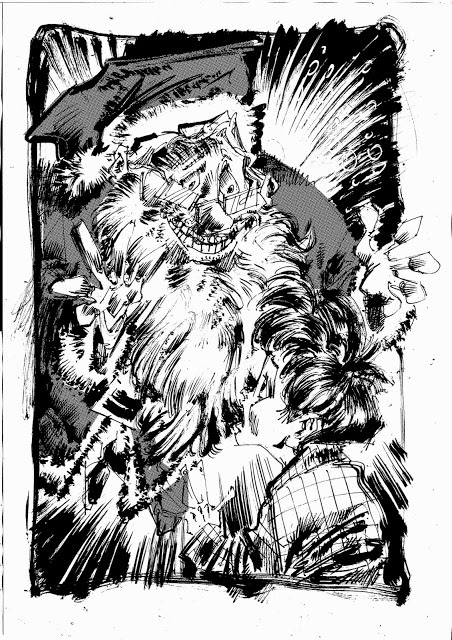 And what Cody felt then he could never really say: only that it was better than any present anyone could ever get. Only that it made his heart so warm it melted like magical WHATEVER IT WAS, trickling down through his whole body. Only that it made him want to reach out his arms and hug Santa Claus, hug his mother, hug his father (and FORGIVE him too, for running out on them) and his aunts and uncles and cousins (even his Cousin Erskine who was SUCH a pain) and Big Mouth Jenny Rizzo (who really wasn’t so bad most of the time) and all his friends and teachers and the kid in his karate class who always smelled SO BAD and, embarrassing as it sounds, it made him want to hug everyone and everything in the whole world including rabbits and snakes and trees and lizards and grass and lions and mountains and, yes, the EARTH HERSELF.

Cody wanted to hold that gaze, to keep his eyes locked on Santa’s, forever. (Or longer, if he could.) Wanted to swim in that incredible feeling, drown in it, till GOD HIMSELF came down to say: “Enough!”

Except that he blinked. Just once. But in that wink of an eye, Santa was gone. Cody’s mother was asleep in the chair again and, for one terrible moment, the boy thought that the whole thing must have been a dream.

Except, under the tree: THERE WERE THE PRESENTS.

Except, out the window: THERE WAS THE SNOW, the rain, the magical WHATEVER IT WAS, shooting up, like a blizzard in reverse, from every house, every apartment building. Shooting up into the heavens, gathering together like a fireball, like a white-hot comet—

—and fading away into the night: going, going...

And soon, he, too, was drifting off to sleep. And as he drifted, a wonderful thought rose up, like a balloon, inside him. Rose, then POPPED—spreading the thought to every corner of his mind. Giving him great comfort. Great delight:

Back in the day, my mother would cut high school and head out to see Sinatra's live performances, swooning in the audience along with thousands of other teens. She passed her love of Frankie on to me and it's never abated.

This is one of my all-time favorite Sinatra tracks, performed live with Count Basie and his orchestra.