The new hardcover edition of The Stardust Kid comes out this Wednesday from the fine folks at Archaia.  Along with the five issue series illustrated by the legendary Mike Ploog (with amazing color by Nick Bell and Sumi Pak), it also features pitches, pencils, scripts, character designs and a new introduction by yours truly, which you can read below.  Enjoy! 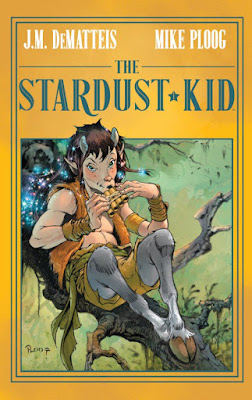 Stories, as I’ve often observed, have lives of their own.  They’re living, breathing, independent entities and no matter how a writer may coax and cajole, sweet-talk and seduce, he can never truly control a story and he certainly can’t force it do something it doesn’t want to do.  They’re stubborn beasts, these tales, and, hard as this is to admit, they’re always right.

Each story also has a unique timing:  like a human being, it needs to gestate in a womb (in this case, the womb of the unconscious, of the creative self).  The difference is that we generally know when a human is ready to be born:  stories, on the other hand, can leap, full-grown, into the world overnight or take their sweet time coming to red-faced, squalling life.  And the writer, poor fool, is like a 1950’s sitcom father, pacing in the hospital waiting room, wondering when the nurse will come bursting through the door with word of his child’s arrival.  That waiting can sometimes take decades.

Case in point:  The Stardust Kid.

The idea started brewing in my head in the early 1980’s when my son Cody was a toddler.  I was living in a very rural area of upstate New York and, as the story began forming in my head,  it became a way to mythologize our family’s life there, to reveal the magic and miracles at the heart of the everyday world, and, especially, to pay tribute to my son (renamed Cody DiMarco for the story) by making him the protagonist of an epic fantasy-adventure.  All these years later, I’m not sure what form The Stardust Kid (the title was there right from the start) first took—I may have planned it as a children’s book—but its first complete form was as a screenplay:  a Spielbergesque fantasy.  My agent at the time took the script out and we had a few wonderful rejections—yes, there are such things—as well as some serious interest that, ultimately, led nowhere (welcome to Hollywood).  Disappointed, I tucked SDK away, not knowing if I’d ever return to it.

By the late 80s, my career in comic books was going strong and—perhaps reacting to the grim and gritty, “adult” sensibility that gripped the industry then—I became intrigued by the idea of doing comics geared for children and parents:  not adaptations of popular cartoons as was the norm, but (inspired by the books Cody and I devoured together, especially the Oz and Narnia series we both adored) a smart, beautifully-illustrated comic book that mirrored the best in children’s literature.  I’d just finished Moonshadow—a real breakthrough for me as a writer—and I wanted to take the lessons I’d learned crafting that series and apply them to a kid-friendly story.

I pitched the idea to the late, great Dick Giordano and my old friend Karen Berger at DC Comics, they enthusiastically agreed to publish it and I went to work on the first few scripts.  As I recall, we had different artists attached at various times—I remember Joe Staton doing some wonderful character sketches—but, as I got deeper into the project, an unsettling realization set in:  Given the tenor of the industry, I couldn’t see a book like Stardust Kid, which was so different from most of the material coming out at the time, getting the support it needed.  After wrestling with the decision, which I’m sure I discussed at length with Karen, I decided to buy SDK back from DC and let it settle back into its womb, hoping it would be born another day.  (Looking back, I realize it wasn’t really my decision at all:  it was the story’s.  It knew the conditions it required for a proper birth and we just weren’t there yet.)

By the late-nineties my interest in doing comics for children had blossomed into an obsession.  The atmosphere in the business had, so I thought, shifted.  Thanks to the emergence of the independents and imprints like DC’s Vertigo, the parameters of what a comic book could be had broadened in the readers’ minds, so I decided to pitch an entire children’s line to a variety of publishers.  If memory serves, I came close with Marvel, but they were going through some seismic business shifts at the time and our talks collapsed.  Rather than continue beating my head against that particular wall, I decided to focus my energies on getting one single kid-friendly comic book into print.  That comic was, of course, The Stardust Kid.

Actually, it wasn’t.  It was another kid-friendly fantasy with the hard-to-pronounce title of Abadazad, which, in 2003, I sold to the short-lived but well-remembered publisher, CrossGen.  The behind-the-scenes Abadazad saga could fill a lengthy introduction of its own, but I’ll spare you those details and focus on the artist of that series: a genius illustrator, a master storyteller, named Mike Ploog.

Working with Mike on Abadazad  remains one of the highlights of my professional life.  Our collaboration was enchanted from the start:  we understood each other, shared a creative vision of what those stories should be, almost instantly.  I’d been carrying Abadazad around in my head for at least a decade before Mike came on board, but, once he did, it was impossible to imagine that universe without him.  To have the opportunity to collaborate with an artist I’d admired when I was just a wide-eyed fan was truly a gift from the comic book gods.  That Mike turned out to be such a splendid, and infinitely entertaining, human being was the icing on the cake.

When CrossGen collapsed beneath our feet (I told you it was quite a saga), Mike and I found ourselves confused, depressed and hiring lawyers to try and get our property back, a process we knew could take years.  Creativity, I’ve always said, is the best revenge, so we decided to launch a new project, a new world, to fill the void Abadazad left in our hearts.  And I had just the thing.

I emailed Mike a more recent incarnation of my Stardust Kid screenplay (I’d been playing with the story on and off over the years), he gobbled it up and, applying a story-sense honed by years in comics and film, gave me invaluable feedback that helped me shape what was now our story in new, and better, ways.  Even more valuable were the astonishing character designs Mike started barraging me with—visions that had been floating in his head for as long as SDK had been floating in mine—hoping I could somehow weave them into Cody DiMarco’s tale.  Many, perhaps most, of those Ploog Creatures never made it into the book, but what they did do was inspire and excite me, helping to create a visual map for the Kid’s rich fantasy world.

As we’d done with Abadazad, Mike and I began refining our main characters—I’d write descriptions, he’d whip up designs and we’d bat those back and forth, molding and shaping Cody, Paul, Alana, the Dark Woman and the rest of our magical cast.  I put together a proposal, which we pitched along with Mike’s beautiful sketches, and, with surprising swiftness (y’know, if you discount the preceding twenty-plus years of development), the project was sold and we got to work.  Labor had finally started, the long-gestating baby was about to be born and I was one happy father.

In more ways than one.

When the five-issue mini-series was done, our first collected edition was edited by a young Boom! Studios employee named Cody DeMatteis.  The cosmic symmetry was as mind-boggling as it was heartwarming:  here was my son, the toddler who sparked The Stardust Kid’s long and winding creative journey, now fully grown and leaving his imprint on the story he’d inspired all those years before.

It’s enough to make you believe in miracles.  And the magic of story.

I hope that magic fills your heart and soul as you read the tale that follows. 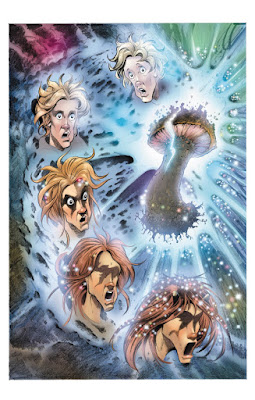