A WORLD OF WIZARDS

This coming weekend I’ll be appearing at Wizard World Atlanta.  You can find me in Artist’s Alley at table B12—where I’ll be happy to sign your books (and, no, I don’t charge for it).  If you’re at the convention, please come by and say hello.

I’ll also be taking part in five panels—one of them with my son, Cody—all hosted by my old friend, the lovely and talented Danny Fingeroth.  Details are below.

See you in Atlanta!

6:30 – 7:15PM 1939: BATMAN’S BEGINNING AND THE YEAR THAT CHANGED EVERYTHING WITH J.M. DeMATTEIS, AARON SAGERS AND DANNY FINGEROTH
75 years ago, as fateful events that would lead to the outbreak of World War II in September 1939 were coming together in Europe, the U.S.A. was experiencing an explosion of popular culture. In 1939, Batman debuted in Detective Comics #27; Timely (later Marvel) Comics released Marvel Comics #1, showcasing the first Marvel superheroes, Sub-Mariner and the Human Torch; and Hollywood produced classic films including The Wizard of Oz, Gone With the Wind and Stagecoach. Discussing historical and cultural factors that made that year so important is a panel including J.M. DeMatteis (Spider-Man; Justice League,) pop culture expert Aaron Sagers and Danny Fingeroth (Disguised as Clark Kent: Jews, Comics, and the Creation of the Superhero.) (A314)

11:00-11:45AM HOW TO WRITE COMICS WITH J.M. DEMATTEIS, JUSTIN JORDAN, NATHAN EDMONDSON AND DANNY FINGEROTH
Accomplished comics writers J. M. DeMatteis (Spider-Man; Moonshadow,) Justin Jordan (Superman; Green Lantern,) Nathan Edmonson (Ultimate iron Man; Black Widow,) and Danny Fingeroth (Deadly Foes of Spider-Man; How to Create Comics from Script to Print) show and tell you how to write comics and graphic novels, going from initial idea to outline to script to finished story. Plus, the panelists will answer your questions about both the creative and business sides of the comics writing profession, including how to find an artist to work with (hint: a comics convention is the number one place!) and how to write exciting dialogue! (A314)

2:00 – 2:45PM DEMATTEIS & SON: SPIDER-MAN’S J.M. DEMATTEIS IN CONVERSATION WITH ADULT SWIM’S CODY DEMATTEIS
J.M. DeMatteis is one of the most admired names in comics writing with long stints on Spider-Man and Justice League, as well as acclaimed work on his creator-owned projects, including Moonshadow and Brooklyn Dreams. His son, Cody DeMatteis, is a creative force in his own right, including working on Adult Swim’s Off the Air! Today, father and son discuss the ups and downs of the creative life with each other and with comics writer and editor Danny Fingeroth (The Rough Guide to Graphic Novels.) (A314)

4:30 – 5:15PM THE RETURN OF SPIDER-MAN WITH MARK BAGLEY. J.M. DEMATTEIS, AND DANNY FINGEROTH
[Note: Bagley is appearing only at this panel, not on the convention floor.]
With the recent blockbuster release of the Amazing Spider-Man 2 movie, and the concurrent return of Peter Parker in Spider-Man’s comics, the world is, more than ever, Spider-Man crazy. As if that’s not reason enough to celebrate all things arachnid, 2014 is the 30th anniversary of the debut of Spider-Man’s alien costume (which would become Venom) and the 20th anniversary of the beginning of the controversial Clone Saga! Join legendary Spider-Man comics creators Mark Bagley (Ultimate Spider-Man; Thunderbolts,) J.M. DeMatteis (Amazing Spider-Man; Kraven’s Last Hunt,) and Danny Fingeroth (former Spider-Man group Editor and writer of Deadly Foes of Spider-Man) for a freewheeling discussion of the life and times of Peter Parker’s wall-crawling alter ego! (A315)

With movies adapting comics at what seems a record-breaking pace—with everything from Amazing Spider-Man, Superman, Batman and The X-Men to American Splendor and Art School Confidential—some top creators who have worked both sides of the fence talk about the creative process and the business side of working on characters and properties that exist in comics, as well as in movies and on TV. J. M. DeMatteis (Spider-Man; Teen Titans Go!,) Bob Layton (Iron Man; The Helix) and Aaron Sagers (Entertainment Weekly) talk about their experiences with comics and screened media. Danny Fingeroth (The Stan Lee Universe) moderates. (A314)
Posted by J.M. DeMatteis at 3:16 PM 39 comments


Got back late Sunday night from the Motor City Comic Con and, as usual after these events, I crawled through the front door brain-fried and wasted.  (I don’t drink, but I’ve got a serious comic book hangover.)  For a guy who spends most of his time alone in a room, playing with his imaginary friends, it’s quite a dimensional shift to spend three days among thousands of people, signing books and talking till I’m hoarse.

That said, the joy of these conventions—and it really is a joy—is meeting the folks who read, and appreciate, my work.  The people who visited my table at Motor City were an enthusiastic and heartfelt group and I offer deep thanks to everyone who stopped by:  your kindness was profoundly appreciated.  (A special shout-out to two regular Creation Pointers:  Drew and the ever-mysterious Jack.  A genuine pleasure to meet you both outside the confines of cyberspace.)


I also got to spend time with—among others—my frequent collaborator Kevin Maguire (who had some amazing prints for sale), Mark Waid (that kid’s got talent:  I think he’s got a future in this business), Christy Blanch (whose digital series The Damnation of Charlie Wormwood is one you should be reading), the Sliderwave Family (they know who they are) and the inimitable William Shatner.  Okay, so I didn’t actually hang out with Shatner, but my beautiful wife (who spent a good part of the weekend taking pictures, including the ones on this page) and I attended his panel and he was, as always, smart, funny, whimsical, philosophical, hugely entertaining and extremely Shatnerian.

So fare thee well, Michigan—and thank you.  Next up:  Wizard World Atlanta.  And—for the moment, at least—that’s it for me and conventions this year.

I’ve contributed the introduction for a new anthology called 8 Percent.  It’s a benefit book—featuring work by comic book legends Tom DeFalco, Ron Marz, Rick Leonardi and many others—that aims to raise money to fight pancreatic cancer.  I’ve included the intro below, in the hopes that it will induce you to buy the book (which you can order right here).  As you’ll see, this cause is very close to my heart.
***
My mother, Bea, was diagnosed with pancreatic cancer in September of 2000. She was gone by January of 2001. The months between unfolded a process that was both harrowing and inspiring. As we watched the disease eat away at her, watched her literally shrink in her bed, it sometimes seemed as if the universe was erasing my mother and there was nothing we could do to stop it. Yet, miraculously, this process did something else: it peeled away the layers of personality—the self we reveal to the world—and exposed the shining soul beneath. I don’t know quite how to capture this in words, but one sad, and beautiful, memory springs to mind.
Bea spent her last months at my sister’s house, surrounded by loving family. I lived a hundred miles away so, once a week, I’d drive down, either alone or with my wife, and visit. On this particular day we were told that my mother had been resting, with her eyes closed, for more than twenty-four hours—and we’d reached a point where we weren’t sure those eyes would ever open again; but, as my wife and I sat beside Bea’s bed, taking comfort in just being near her—call it the spiritual equivalent of warming yourself by the fire—she stirred, opened her eyes and looked at us. For a moment she struggled to focus, to orient; then, it was clear, she saw us—and the look on her face was radiant, as if she was gazing at something astonishing and sacred. “What do you see?” my wife asked.
My mother didn’t respond for a moment, two, and then, in the sweetest, gentlest voice, said: “I see love.”
With all the pain and sorrow, there were so many moments of true grace in those months—and I’m grateful for every one of them. But then, inevitably, came death.
Understand: I believe completely in the continuity of the soul, in the existence of an afterlife and the reality of reincarnation. But once my mother was gone, once that beautiful, terrible dying process was over, I wasn’t pondering the image of Bea cradled in God’s arms, sailing through Eternity. No, I was missing her—and feeling the huge hole that had just been punched through all our lives. I remember thinking: Okay, it’s over now, we’ve made it through the process. Can I have my mother back please?
My heart tells me, with conviction, that Bea is fine. That her soul has continued on. That she’s happy in a new, and better, life. But that knowledge doesn’t change the fact that, even after all this time, I still miss her. There’s so much she could have seen and done, so much we could have shared. When I think of the delight Bea would have taken watching my son grow into amazing manhood, my daughter blossom into the remarkable young woman she is today, I feel a sorrow and regret that feels fresh, raw. But that’s what the business of being human is about, isn’t it? We root in our faith and belief, yet we allow ourselves to long and grieve.
Beatrice DeMatteis has been gone for thirteen years, but I hope this book you hold in your hands can, in some small way, contribute to a world where pancreatic cancer is eradicated. Where someone else can fill those thirteen years—and more—with the richness and joy of a life well- lived.
©copyright 2014 J.M. DeMatteis
Posted by J.M. DeMatteis at 12:40 PM 13 comments

Last time around, I shared the outline for my Legion of Super Heroes story, "Cry, Wolf."  This time around, I thought I'd post a section of the actual teleplay, so you can see how the story evolved from Stage One to Stage Two.  (I'd have posted more, but I had a difficult time getting the document into any kind of shape that would both maintain the formatting and be easy to upload.)

Next time around, I'll link to the finished episode, which—after the script has passed through the hands of the show's writing staff, the director and animators, is inevitably different and, in most cases, better for it.

And, once again, let's remember that Legion of Super Heroes is ©copyright 2014 Warner Bros/DC Entertainment. 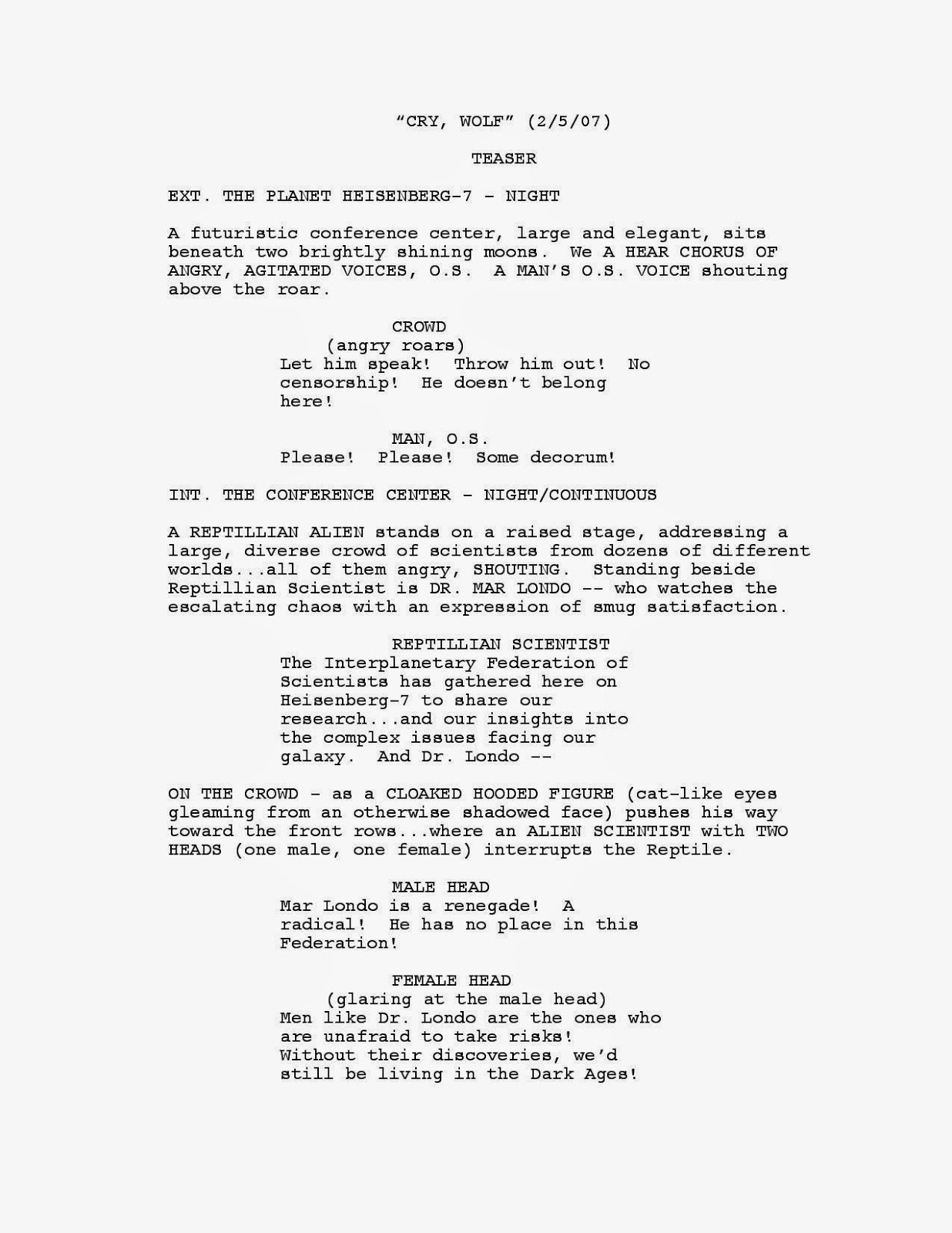 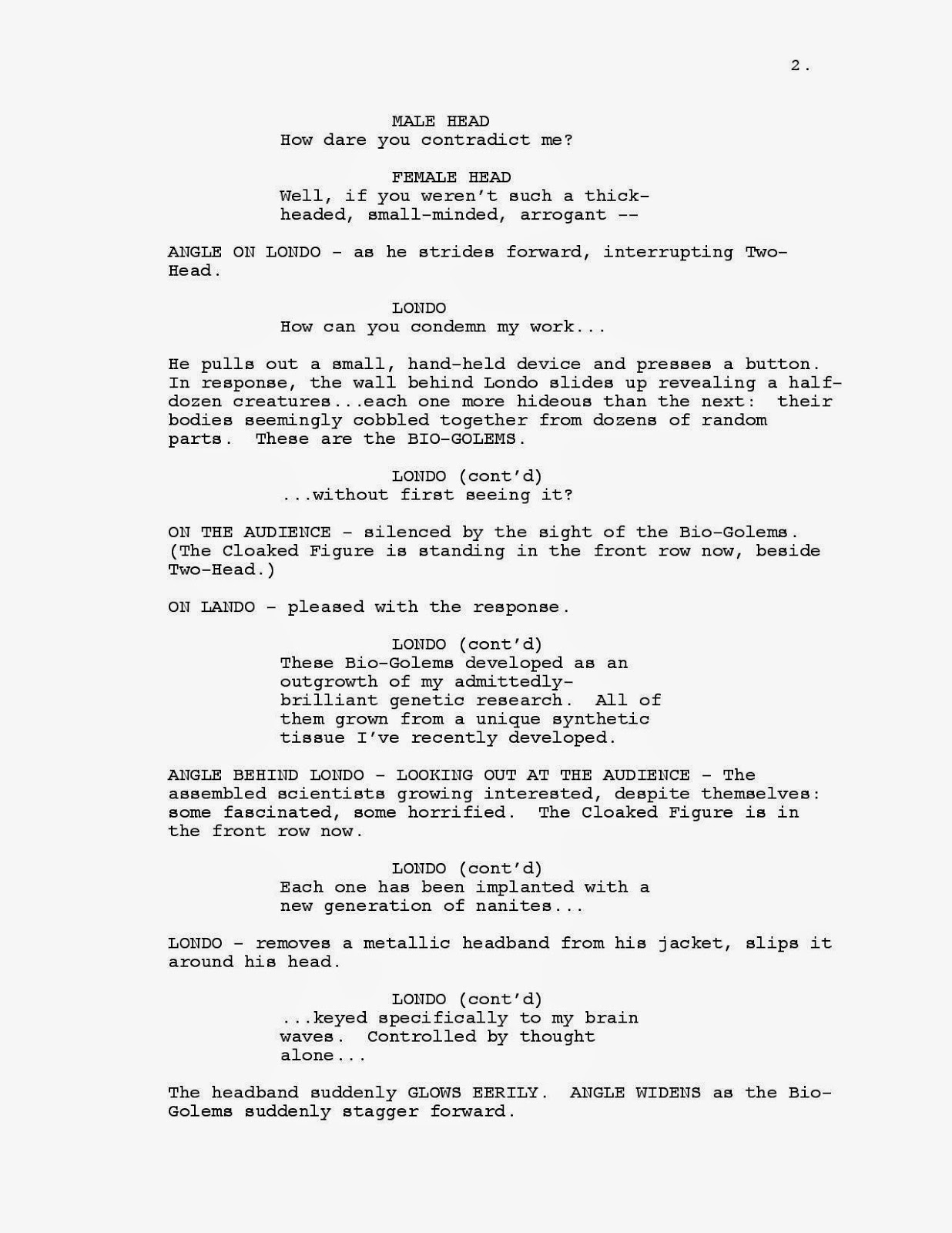 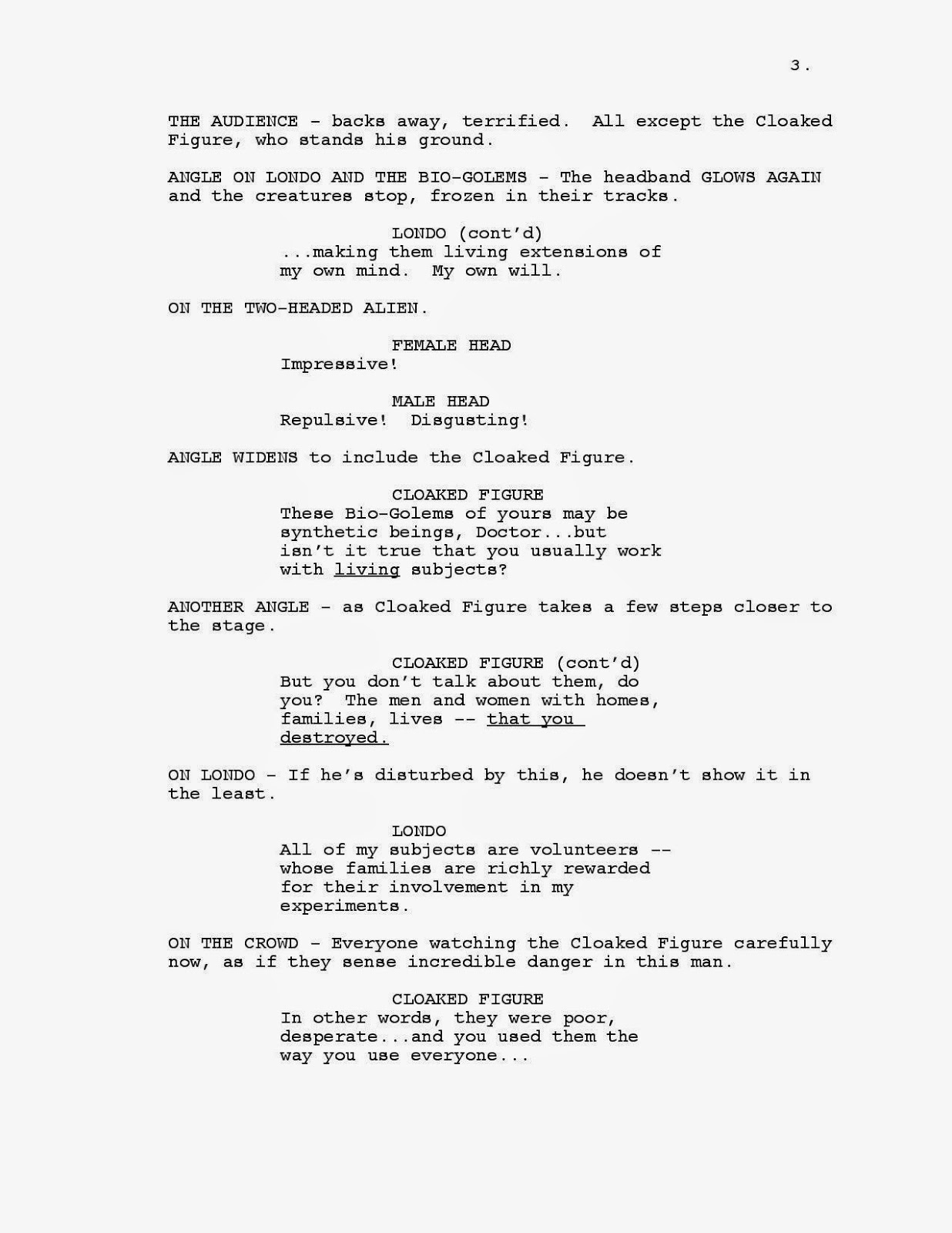 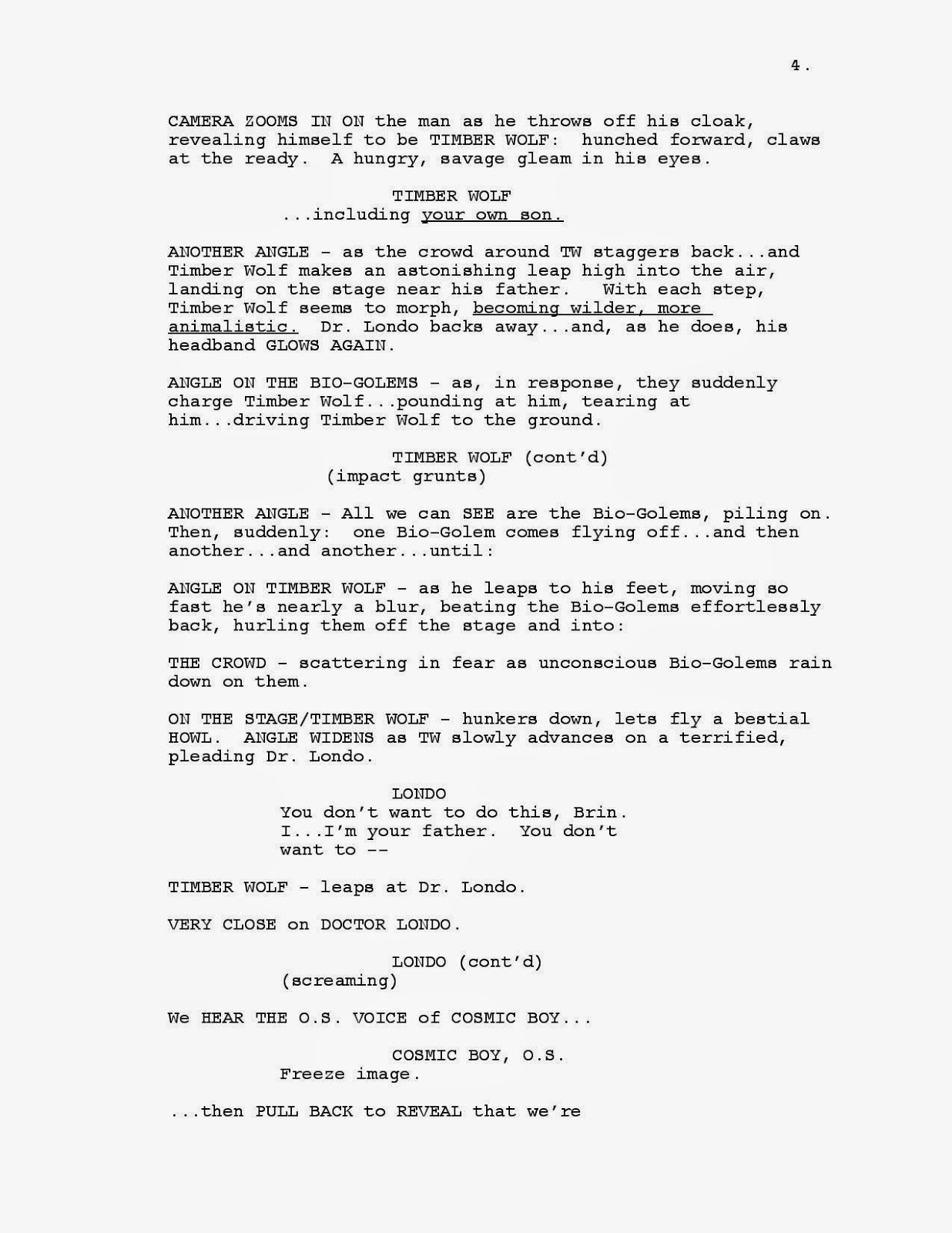 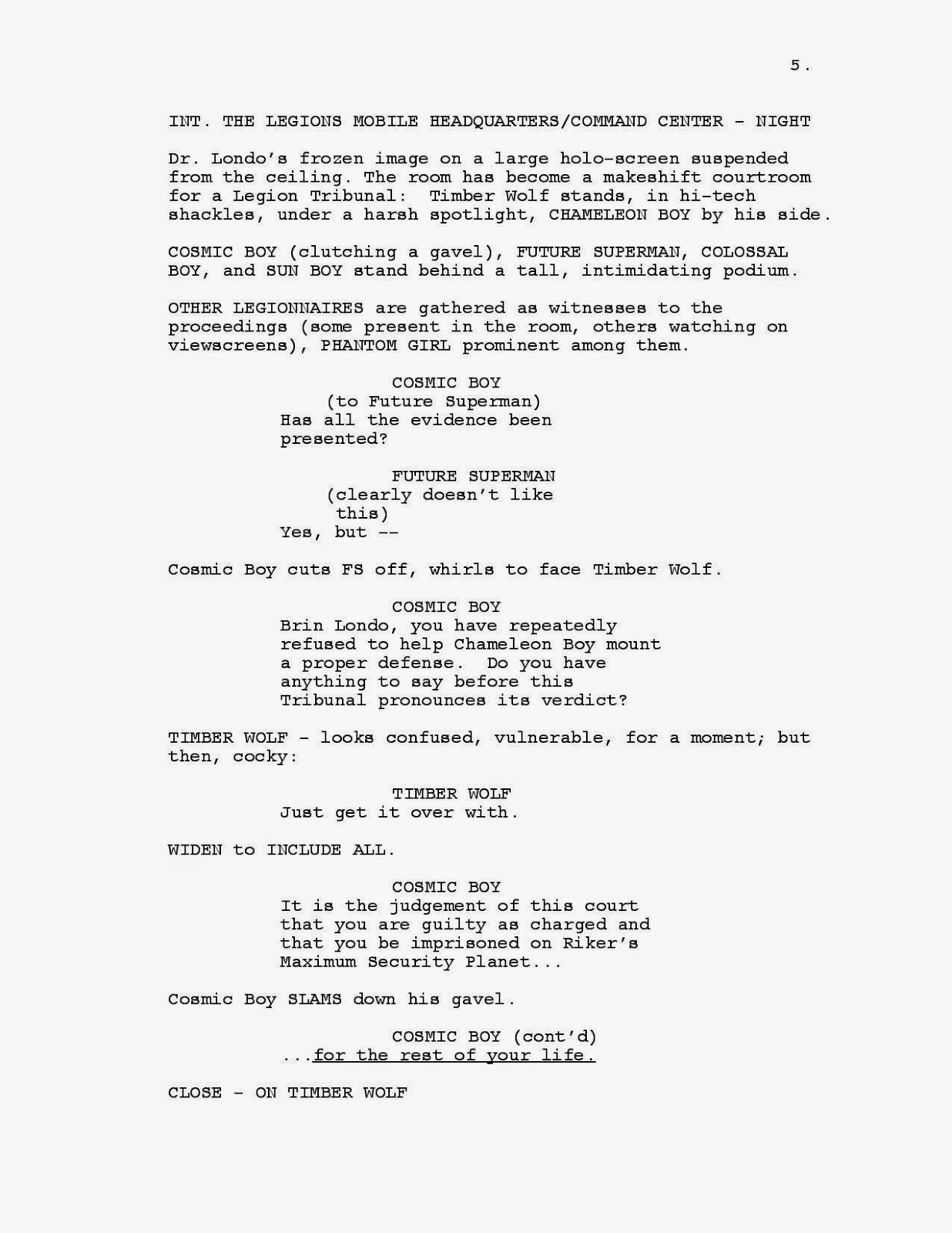 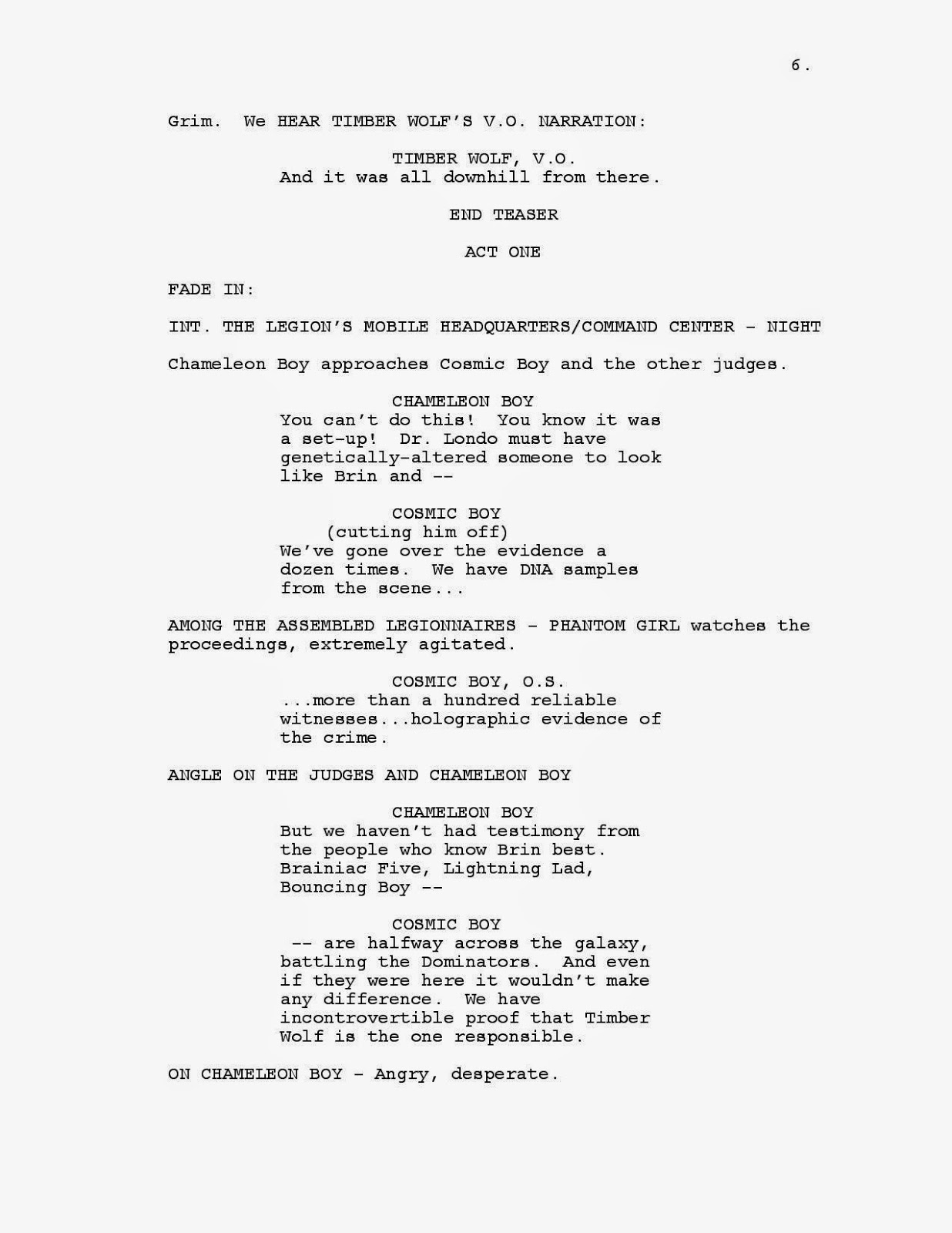 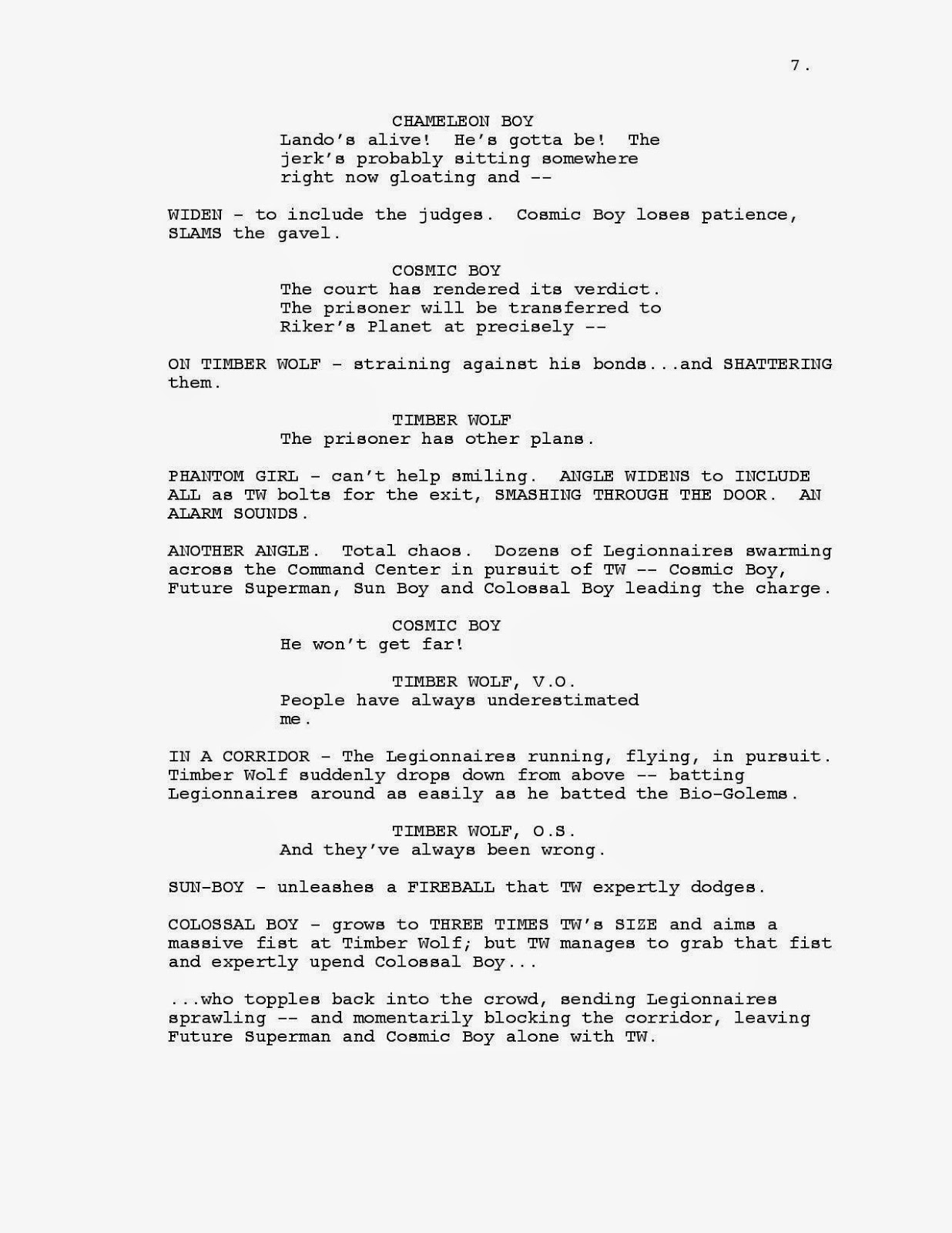 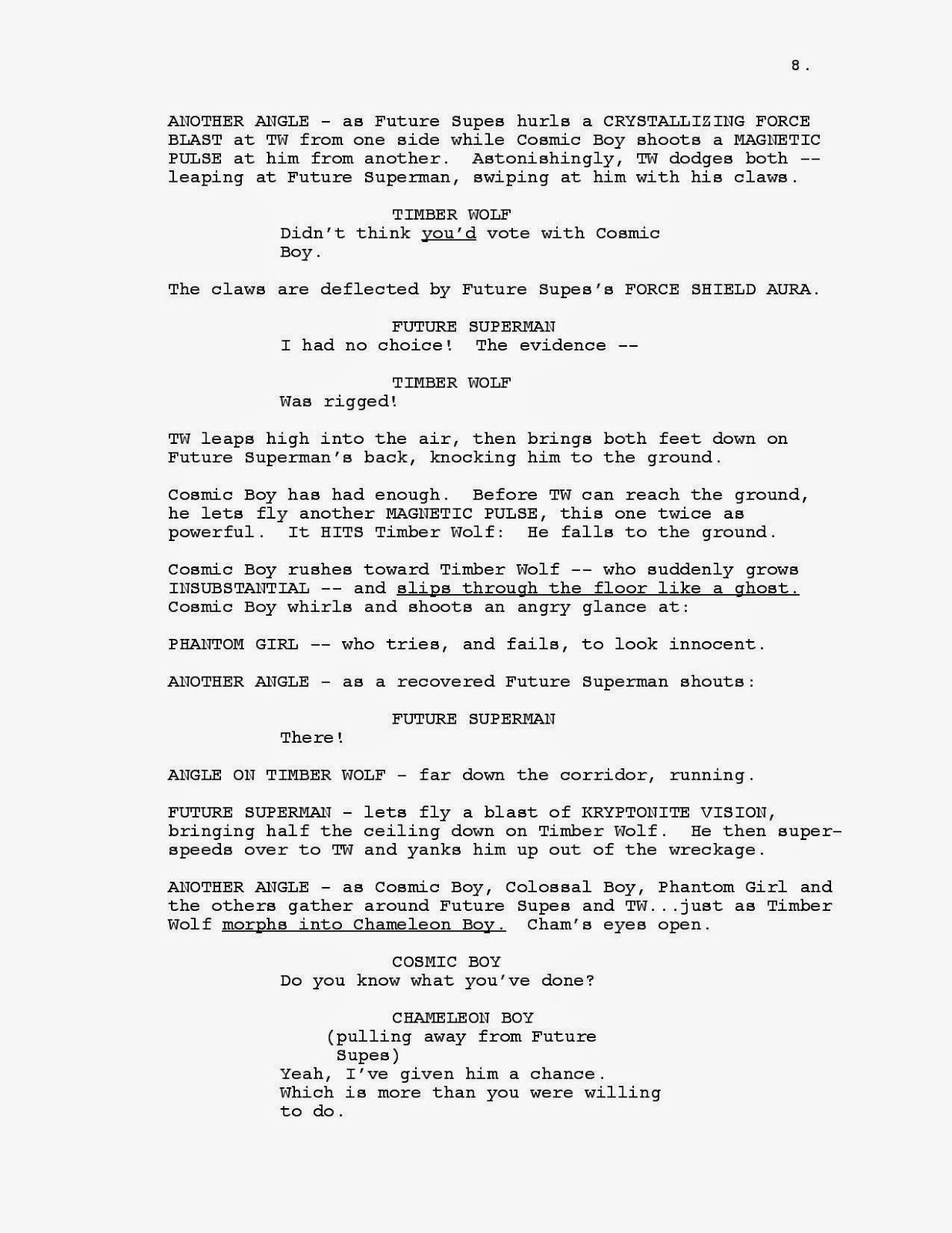 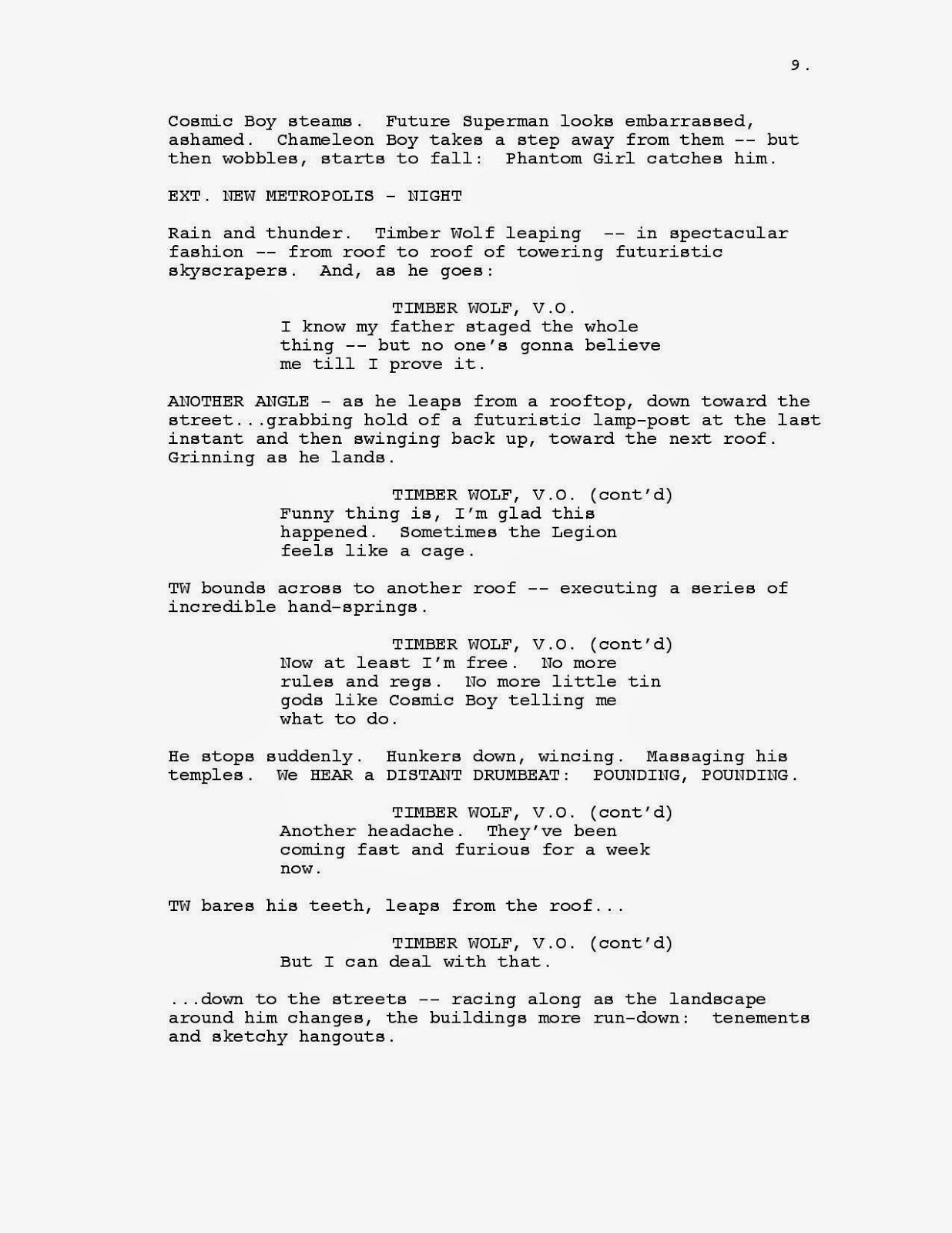 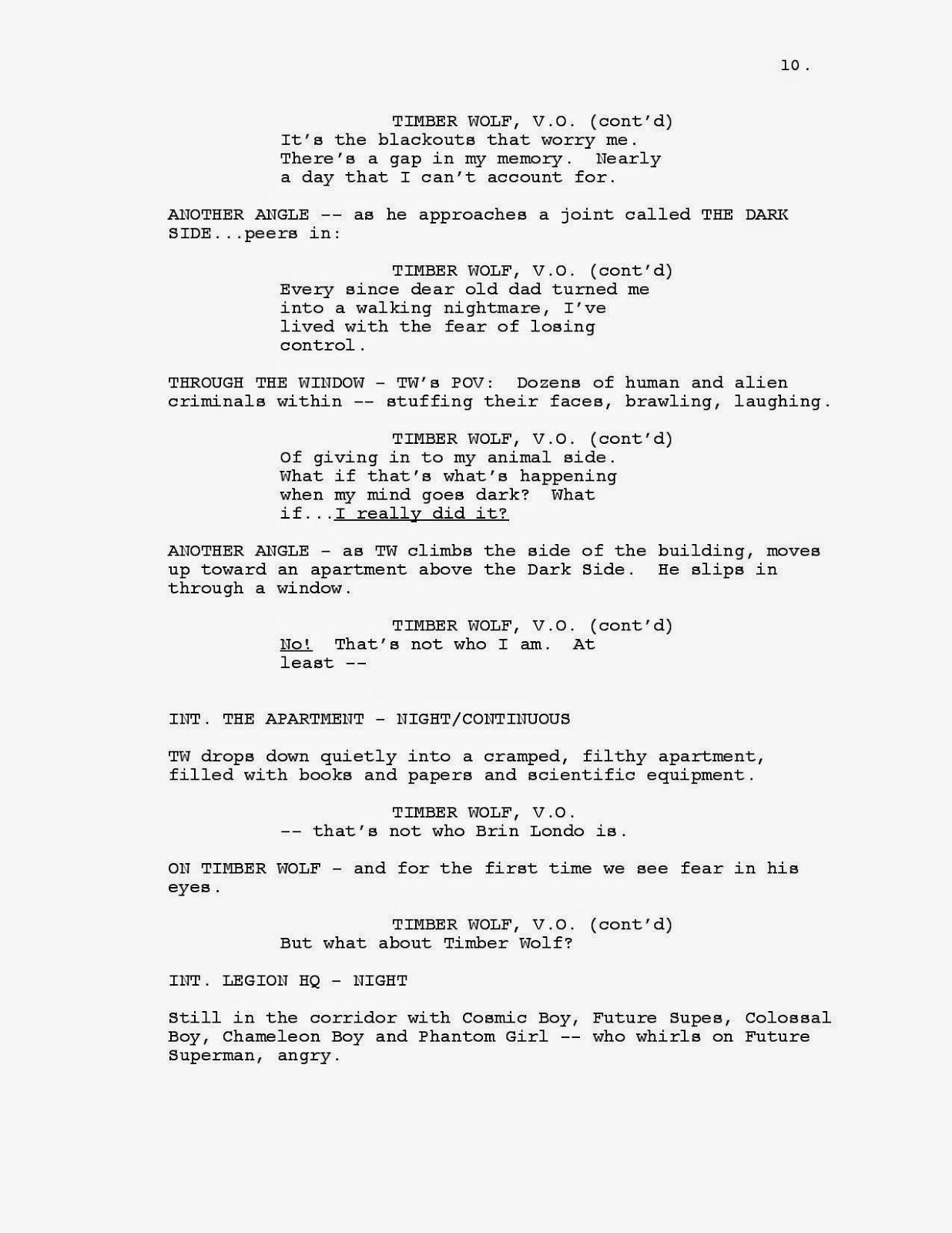 I can go for months without being asked for an interview then, suddenly, it seems as if everyone in the world—the comic book world, anyway—wants to talk to me.  So here, for your listening and dancing pleasure, are three interviews about my work on Justice League Dark:  one with Newsarama, one with Comicosity and one with Comic Vine.  Then, if you're not totally sick of me, you can click on over to this interview where I discuss my old friend Spider-Man with the Oakland Press.

That last Q & A mentions the fact that I'll be at the Motor City Comic Con from May 16th through the 18th.  If you live in the Detroit area, please come by, say hello and bring some books for me to sign.  At the end of the month—the weekend of May 30th through June 1st—I'll be in the steamy South for Wizard World Atlanta.  I'll be signing and doing three, possibly four, panels, as well.  These are the first two cons of 2014 for me and I'm looking forward to them.  (I really need to get out of the house!)