Just this morning I came across a quote, from a 2002 interview with Kurt Vonnegut, that beautifully illuminates the previous post's discussion of Bleak Chic and the role art plays in our lives:  "You know," Vonnegut said, "the arts are supposed to ideally make people like life better than they had before."

Vonnegut could hardly be accused of having a rosy worldview, but his best stories and essays were marked by profound compassion and a belief in the power of simple human kindness.  My favorite of his books—one of my favorite novels by anyone, actually—God Bless You Mr. Rosewater, bears testament to the great beating heart at the center of Vonnegut's work.

"The arts are supposed to ideally make people like life better than they had before."  To which I can only say, amen.  And thanks, Kurt.
Posted by J.M. DeMatteis at 1:44 PM 4 comments

There’s a lot of utterly brilliant writing out there that’s just too damn bleak for me.  I watch certain television shows, read certain books, and I’m left with both awe-struck admiration for the artists behind the work and a deep desire to run, screaming, for the hills.  When I think of the books I’ve cherished most—Bradbury’s Dandelion Wine, Salinger’s Franny and Zooey, to name two—they left my heart full, my soul quickened.  They cracked opened my consciousness and connected me to something bigger, and truer, than myself.

I read a quote, years ago, from Avatar Meher Baba that said the “truth is that which uplifts.”  I feel the same way about art.  It should look life’s struggles and sufferings square in the eye without flinching, then look farther, deeper, raise our eyes to the heavens and point the way there (a path that, in my experience, leads us straight back to our own hearts).  I don’t mind a crawl through the darkness—I think we’ve all done our share of midnight-wrestling with demons, of sinking, neck-deep, in the quagmire of despair—but, in the end, I need a story to bring me to the light, to remind me that life has meaning, purpose, value; that the universe is, ultimately, a positive, loving place.  That there’s hope.

I had a conversation with a friend the other night about the 1960’s and what it was like growing up in the Nuclear Shadow.  I’m old enough to recall, with traumatic clarity, the Cuban Missile Crisis of October, 1962—most notably President Kennedy’s speech to the nation that, stripped of its Oval Office patina and translated by my eight year old brain, said, “Head for the shelters, kids.  The missiles will be flying and our asses are cooked.”  The instant that speech was over I flew into my bedroom, dropped to my knees and prayed to God, with every iota of my being, begging Him to spare us from the coming holocaust.  (I don’t recall praying much, or ever, before that:  Perhaps that moment was the beginning of my own spiritual search.)  I also remember walking to school the next day—I was in the fourth grade—and the conversation with my friends as we discussed the imminent end of the world.  Understand, this wasn’t a “could be” or “maybe,” we really thought the End Was Nigh.  The next year, when JFK was assassinated, it seemed that the very fabric of reality was unravelling, that the center would not, could not possibly, hold.

And yet, as the 60’s progressed, as the generation that grew up in the shadow of armageddon grew older, the popular and political culture of the time was defined, above all, by a sense of hope, of limitless possibility, of the belief that this world that tottered on the brink of destruction could be changed for the better.  In many ways the Beatles, who appeared on American television just months after the Kennedy assassination, became the embodiment of that optimism.  “All You Need is Love,” they sang.  “It’s getting better all the time.”  “Don’t y’know it’s gonna be all right.”   And many of us believed it.  I certainly did.  And still do.

Perhaps the unpredictable nature of a world where terrorist bombs could explode anywhere, any time, where global warming threatens to upend the natural balance and blot out the future, has given rise to the current wave of Bleak Chic.  But is the current reality any more harrowing or hopeless than the reality I faced at eight years old, the one where a sudden flash of light, a deafening roar, could have left the human race on its knees in a nuclear ruin?  I don’t think so.  Which is why I’d love to see more optimism, more awe, more joy and wonder, in the arts—and, yes, in our social and political discourse.
I’m not trying to tell anyone else how to approach their art:  If you honestly believe that life is a chaos-ride to hell, rot and ruin, then you owe it to yourself to present that in your stories (or songs or paintings)—and do it with honesty and passion.  If you do it well enough, there’s a good chance I will watch, or read, or listen—and applaud your effort.  But I doubt I will cherish your work or hold it in the deeps of my heart.

I often return to a quote from the science-fiction writer David Gerrold (who, among many other achievements, wrote the “Trouble with Tribbles” episode of the original Star Trek—a show rooted optimism and idealism).  I tore it out of a science-fiction magazine back in the mid-1970’s, tacked it to a corkboard and it’s travelled with me ever since.  I think Gerrold’s words about writing apply not just to all art—but to all of life:

"A good story is about pain and hope and the transition from one to the other. Most important, it is about what we learn in the process of that transition.  The essential quality is hope."

While I was at the Baltimore Comic-Con, I had a lengthy and (I hope!) interesting conversation with Tiffany from Little House Online.  I've embedded the interview below for your listening and dancing pleasure.  Thanks to Tiffany and Little House head honcho Sal Crivelli for the thoughtful questions.  It was a pleasure.

THE WRATH OF CON

The Baltimore Comic-Con keeps growing every year—and this year’s gathering was huge.  When my wife looked out of our hotel window Saturday morning and saw the lines snaking back and forth, back and forth, outside the convention center, I knew that the days when BCC was a small, intimate show were over.


The good news is that means the creators get to meet, and talk to, even more fans—which, for me, is the primary reason for attending these events.  I spend a lot of time alone in a room, playing with my imaginary friends, and when I have an opportunity to hear from the people who have read, and been touched by, my work, it’s a delightful, and often moving, experience.  When someone tells me that one of my stories sailed out across the world, pierced his heart, made a difference in his life...well, to say that I’m incredibly grateful doesn’t come close to covering it.

Of course, along with the growing legion of fans at BCC, there’s an ever-growing legion of my fellow professionals—and I was lucky enough to spend time (sometimes just a fleeting hello, sometimes a lengthy conversation) with old friends and new, including Ray Fawkes, Bob Greenberger, Paul Kupperberg, Dean Haspiel, Mark Waid, Paul Kaminski, Ross Richie, Dan Didio, Ron Marz, Jack C. Harris, Jim Starlin, Kevin Maguire and some guy named Giffen, who insisted on sitting at the table next to mine for the entire weekend.

The highlight of the convention, though, was a Sunday morning breakfast in honor of the man of the hour, the great Sal Buscema—who received a well-deserved life-achievement award Saturday night at the Harveys.  I hadn’t seen Sal since our days working on Spectacular Spider-Man together and it was wonderful to share a meal with Mr. and Mrs. B, along with two other exceptional Spider-artists—Mark Bagley (another collaborator I hadn’t seen for at least fifteen years) and Ron Frenz—and my old buddy, legendary writer/editor Tom DeFalco. 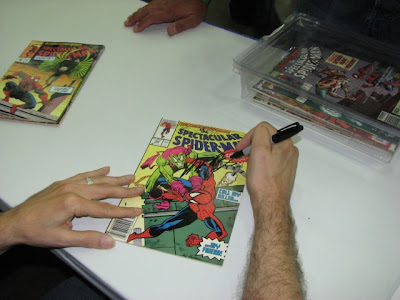 The word is that next year the Baltimore Convention is expanding to three days.  I think this comic book thing might finally be catching on!
Posted by J.M. DeMatteis at 2:12 PM 20 comments

THE DREAM OF LIFE

Just came across this video—that features the words of the late writer and philosopher, Alan Watts—and had to share it with you.  It resonates with beauty, magic and truth.