"Love is essentially self-communicative; those who do not have it catch it from those who have it. Those who receive love from others cannot be its recipients without giving a response which, in itself, is the nature of love. True love is unconquerable and irresistible. It goes on gathering power and spreading itself until eventually it transforms everyone it touches."
Avatar Meher Baba
Posted by J.M. DeMatteis at 9:41 AM 6 comments

I’m stunned, and deeply saddened, to hear that writer and producer Dwayne McDuffie has passed away.  I didn’t know Dwayne well, but I had tremendous respect for him—both as a writer and a man.  Dwayne was close friends with my old buddy Stan Berkowitz—they worked together on Justice League Unlimited, among other projects—and the three of us would sometimes go out for lunch or dinner when I visited Los Angeles.  The last time I actually saw Dwayne was in April of 2010 (we shared an extraordinary Persian meal and Dwayne graciously, generously, picked up the check), but we worked together last summer, when I wrote a Ben 10 script for him.  Dwayne was, as always, fiercely intelligent, profoundly creative, and a genuine pleasure to collaborate with.

He was also far too young to leave us.

I send heartfelt condolences, and waves of prayer, to Dwayne’s family and friends.
Posted by J.M. DeMatteis at 4:41 PM 14 comments

PLOOG, BELL AND THE WATERLOGGED WARLOCK

The third book in my Abadazad

series, The Puppet, The Professor and the Prophet

, only came out in England—which frustrated me for many reasons, not the least of which was the fact that it was unquestionably the best of the bunch.  (Sad to say, P, P and P is incredibly hard to find and when you can track a copy down—as the above link clearly shows—it's hugely expensive.)  With two books under our belts, the creative team had made the adjustment from comic books to the hybrid prose-comics form and we were really firing on all thrusters.  The story was coming together the way I'd always hoped it would and our extraordinary art team—the mad genius Mike Ploog and the equally-brilliant colorist Nick Bell—were topping themselves with every page they turned in.  As proof, here are a few amazing illustrations that most of you have never seen before.  Enjoy!  (And let's not forget that Abadazad is © copyright 2011 Disney Publishing.) 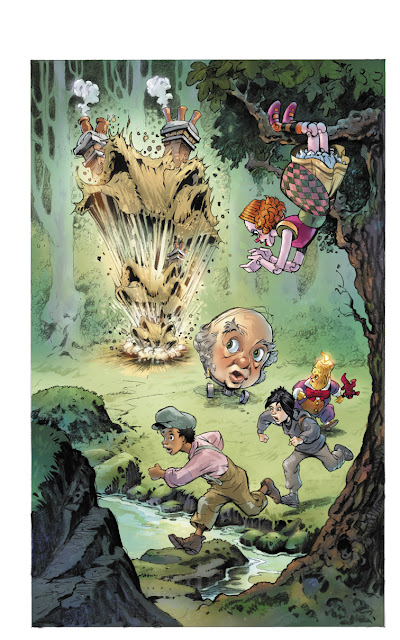 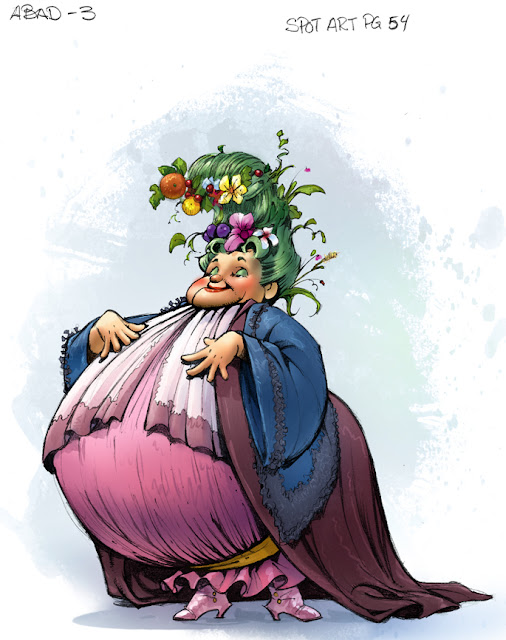 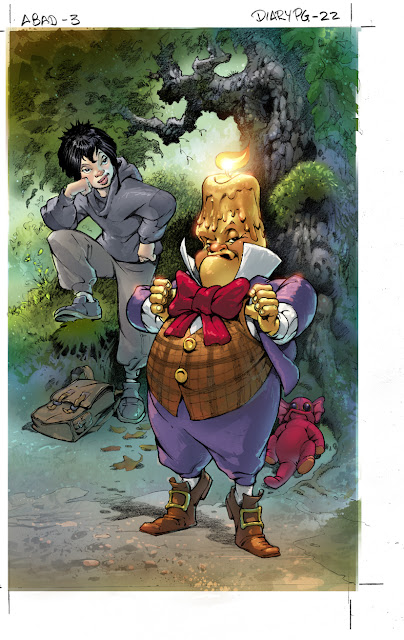 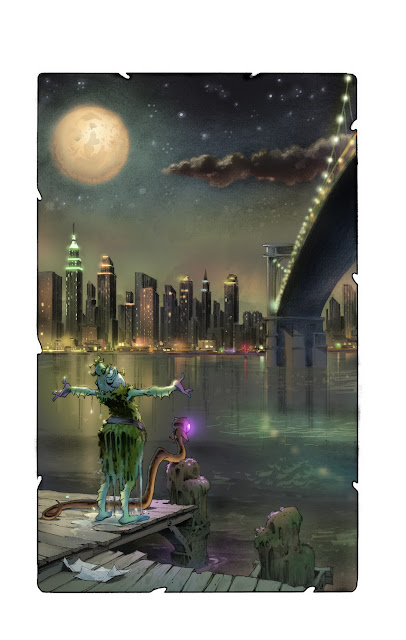 (NOT SO) ADVANCE WARNING

This coming Wednesday, at 7 pm, Cartoon Network will be running the first of my Sym-Bionic Titan episodes.  SBT, if you don’t know, is a new animated series, created by Genndy Tartakovsky (creator of the Emmy-winning Samurai Jack), that features an odd and wonderful mix of space opera, high school angst, monsters and giant robots—all delivered with the powerful visual punch that Tartakovsky is famous for.  This week’s story—which focuses on the show’s resident robot, Octus—was written early in the show’s development, so I had very little sense of how these characters would sound or move or what the Sym-Bionic Titan universe would look like.  Now, having watched a number of episodes, I’m very excited to see “I Am Octus” come to life.  Tune in, if you’re so inclined, and feel free to post your thoughts here at Creation Point.
Posted by J.M. DeMatteis at 9:20 AM 19 comments

I was going through some old, moldy files today, looking for an ancient contract, when I came across buried treasure that I thought had fallen into the Crack Between Worlds years ago:  letters from two of my literary heroes, Kurt Vonnegut and Ray Bradbury.

Back in 1985, when the first issue of Moonshadow came out under Marvel’s Epic imprint, I knew that I’d created my first piece of work with genuine substance.  As I’ve said before, when I sat down to write Moon, it didn’t feel like I was Writing Comic Books, it felt like I was Writing:  Real Writing, without the preconceptions and burdens of someone else’s spandex universe.  I was liberated, I was intoxicated, and, like a proud student, I wanted to share my work with two of my greatest teachers.  No, I’d never met Kurt Vonnegut, but there’d be no G’l-Doses—the Pop! Poof! Pinging! alien zoo-masters of the story—without KV’s Tralfamadorians, and the mixture of wry skepticism and heartfelt compassion that ran through all his novels and short stories had a profound impact on me.  (God Bless You, Mr. Rosewater

remains one of my all-time favorite books.)  As for Bradbury—well, I wouldn’t be the writer, or perhaps the person, I am today if I’d never encountered his work.    There's no writer I admire more.

Yes, Moonshadow was the story that helped me find my own voice as a writer, but in order to do that, I summoned the spirits of every literary influence I’d ever had.  Dostoyevsky and J.M. Barrie, William Blake and Hermann Hesse, weren’t accepting mail at the time, but, happily, Vonnegut and Bradbury were; so I sent copies off to them via their respective publishers, not really expecting a reply, just hoping that maybe, maybe, they’d read Moonshadow and enjoy it.   (I knew there was a slight chance I’d hear from Ray B, as I’d written to him a few years before—a rhapsodic essay in praise of his brilliant novel Dandelion Wine

—and he’d been kind enough to respond.  That letter, I’m sorry to say, really has vanished into the Crack Between Worlds.)

Imagine my delight when I received answers from both of them.  Keep in mind this was long before email:  these were actual letters, created on actual typewriters, which, I suppose, makes them glorious antiques.    First came Bradbury, with this short, sweet missive (I never did get to have that visit I’d requested.  When I went out to L.A. on business, later that year, there was a Writer’s Guild strike and RB was off picketing):

Dear Marc Matteis:  Thanks, much thanks for MOONSHADOW.  Handsomely, beautifully done.  My bravos to you and JON MUTH.  When you hit L.A. call my office number...  Around noon, Tuesdays thru Fridays.  I’ll try to ask you by for a brief chat, at least!  Good luck meanwhile, and again, bravo to you and JON M.  Yours,

He signed it RAY B in a sweeping hand, in silver marker, then drew an arrow, in red marker, leading to the side of the page where he typed this, in response to a question in my letter:

That would have been enough to keep my writer’s soul glowing for several months, but then, a week and a half later, this arrived in my mailbox, dated January 31st:

I thank you for the perfectly beautiful MOONSHADOW 1.  The great-great-grandfather of all such enterprises is, of course, my hero William Blake:  words and pictures all of a piece.

I note that you are a city person gone rural.  I did that on Cape Cod for twenty years, until my kids were grown.  I then discovered that those kids were really the only friends I had made in all that time, and that the immune system of the locals had in fact never accepted me.  Their work at no point touched on mine.  When I moved to the Cape, I was an experienced volunteer fireman from a little town outside of Schenectady --  Alplaus.  So, as a good citizen, I immediately offered my services to the Barnstable Volunteer Fire Department.  It was as though I had walked in off the street in rags and naked to join the New York Yacht Club.

So here I am back in the city, where there are plenty of people with whom I can talk shop.

And he signed it in a charming—and utterly distinctive—way; as if he was holding two pens simultaneously as he wrote.  (I love that the bulk of the letter is taken up with what is, essentially, a one paragraph short story, a miniature gem, told in that unmistakable Vonnegut style.)

As I recall—and let’s face it, it’s been twenty-six years—I sent each subsequent issue of Moonshadow off to both of them, and Bradbury, to my amazement, always replied with a short note of gratitude.  (In retrospect, it’s not amazing at all.  It seems completely Bradburyian:  an action radiant with all the grace, enthusiasm and generosity of his written work.)   Not only that, but some months later, when I screwed up the nerve to ask for a promotional quote to use on the cover of one of the later issues, he readily agreed.  (You can find part of that quote on the cover of The Compleat Moonshadow

When I asked Vonnegut for a promotional quote he, very respectfully, declined.  “I admire Moonshadow a lot,” he wrote...”But I have had to stop endorsing anybody’s masterpieces, since about every third letter I get ends with a request that I supply some kind of praise in writing.”  (Yes, I found that letter from KV, too.)  Much as I would have loved to plaster a Vonnegut quote across the front cover of the book, I completely understood.  The truth is, I was just grateful that the man who’d created Billy Pilgrim and Eliot Rosewater,  who'd made “so it goes” into one of the philosophical catchphrases of a generation, had taken the time to read—and appreciate!—my work.  That I’d had a chance to connect with him at all was a genuine gift from the universe.

Today, when I told my son I’d found the long-lost letters, he suggested I get them framed.  It had never occurred to me before—I’m dense, I guess—but that’s just what I’m going to do.  These twin treasures have to be preserved:  I'm not going to lose them again. 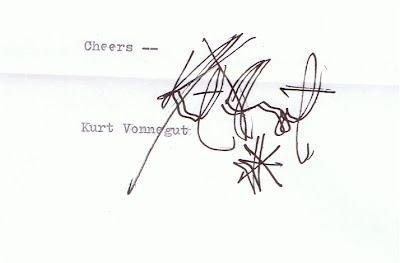 With urging from my old pal Danny Fingeroth, I've signed on to do a class at Manhattan's Museum of Comic and Cartoon Art:  a two hour symposium called "Oh, The Humanity:  Writing Successfully Across Genres and Media."  It's a slightly intimidating (to me, anyway) title for what I hope will be an enjoyable evening, talking about the art and craft of writing for comics, novels, television and film.  Here's how MoCCA describes the class:

While it's not unusual to see comics writers also work on animation or prose in similar genres to their comics work, relatively few work in different genres and media at the same time. J.M. DeMatteis is one of the handful of authors who have worked simultaneously and successfully on popular corporate franchise characters, surreal tales of fantasy, hilariously funny satire, and intensely personal dramatic material, in comics, and also in animation, novels (the non-graphic kind), and screenplays. In this rare teaching appearance, DeMatteis (with kibitzing and inappropriate comments by his longtime editor, Danny Fingeroth), explains what stories in all genres and media have in common: universal human characters and situations (also known as “heart”), and how you can use that fact to be more than a “one-trick-pony” writer.

The class will be happening on Tuesday May 17th—from 7:00 to 9:00 pm—and you can register for it here.  I've never done anything quite like this before, but I'm hoping it will be an enlightening, and entertaining, few hours spent discussing my more than thirty years of wrestling with that formidable beast called Story.  Join us, if you can.
Posted by J.M. DeMatteis at 12:54 PM 35 comments