SHELTER FROM THE STORM

Watching the images of New York City on television last night and this morning, it all seemed like something out of a post-apocalyptic science-fiction movie:  subways flooded, tunnels filled with rushing water, cars submerged on 14th Street, half of Manhattan in darkness.  But it’s not a movie, it’s all-too real, all-too heartbreaking.  As I'm sure you know, NYC is just one piece of the jigsaw puzzle, the devastation Sandy left in her wake is widespread.  (We were lucky here in my neck of upstate New York:  there was rain and some seriously spooky wind, but no major damage.  We didn’t even lose power.  And for that I am profoundly grateful.)

Here’s a link to the Red Cross site for those of you able to donate something to help with disaster relief.  If you can’t afford it—and in these tough economic times, that’s understandable—there’s always the power of a heartfelt prayer.
Posted by J.M. DeMatteis at 1:42 PM 4 comments

Did an interview this morning with a new podcast called The V-Spot.  Despite some heavy sibilance in the phone lines, we had a great time talking about storytelling, the creative process and the joys of comic book collaboration. We also took a nostalgic tour through my work on Spider-Man and Captain America. If you're interested in listening, I've embedded the interview below.

As soon as I saw this amazing cover—art by Vassilis Gogtzilas, color by Carlos Badilla—for The Adventures of Augusta Wind #4, I knew I had to post it here and share it with you.  Vassilis and Carlos have been doing an incredible job on every issue, but this cover is my favorite so far. 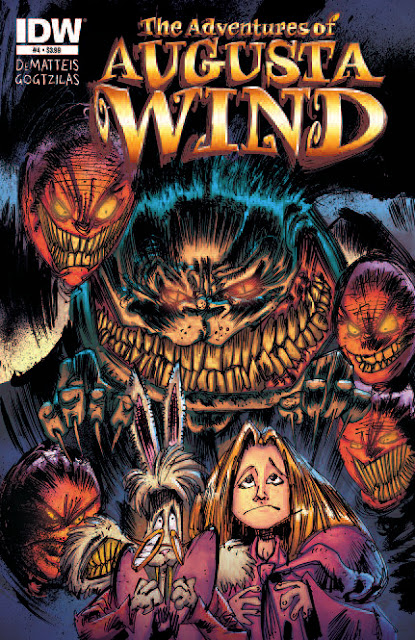 The fourth issue finds Augusta and her companions seeking refuge in the underwater world of Lake Innermost and coming face-to-face with an enigmatic cosmic being called The Sleeper On The Ocean Of Story.  (One of the things I've enjoyed most about working on Augusta Wind is the world-building, creating entire fantasy universes—and the story encompasses quite a few of them—from the ground up.)

The Adventures of Augusta Wind #1—as my relentless drum beating has, I'm sure, made clear by now—comes out in November, which is getting closer all the time. And, yes, I'm as excited about this project as I seem.  I hope you have half as good a time reading Augusta as Vassilis and I have had creating the book.
Posted by J.M. DeMatteis at 9:22 PM 13 comments

A brief reminder that I'll be at the New York Comic Con tomorrow, October 13th, participating in the IDW panel at 12:30 (in room 1A21).  I've also added a signing from 2 to 3 at the Comic News Insider booth (3350).  Well, due to a last minute mix-up I'll actually be a couple of tables down from CNI, but stop by their table and they'll point you in the right direction.  Please come by, say hello and bring books for me to sign.  As many of you know, I don't attend these mind-bogglingly massive events very often, so it's a treat for me to meet, and chat with, the folks who read and enjoy my work.  See you there, I hope!
Posted by J.M. DeMatteis at 10:54 AM 22 comments

Here's IDW's press release for my upcoming mini-series, The Adventures of Augusta Wind.  The book will be out in November and I hope you'll pick it up.

“I’ve long loved J.M. DeMatteis’ writing,” said Chris Ryall, IDW’s Chief Creative Officer/Editor-in-Chief, “and his ability to tell a captivating, action-filled, and heartfelt story is something he does better than just about anyone. It’s great to be doing a book like Augusta Wind that plays to all these strengths in a story that will appeal to audiences young and old. And Vassilis’ visuals perfectly complement the story’s tone and deliver nicely upon the bizarre and charming characters and environments that appear in this story.”
In this thrillingly imaginative, all-ages miniseries, we follow the title character, young heroine Augusta Wind, across five issues of eye-popping, otherworldly realms as she uncovers and chases down her destiny. Visited out-of-the-blue by the Snabbit, a half-snake/half-rabbit, Augusta must leave all she knows behind to leap through colorful, magically envisioned worlds full of unbelievable creatures, high adventure, and heroic mystery!
“Writing The Adventures of Augusta Wind has been a genuinely magical experience, as I’ve watched the story lead me on to unexpected places and grow into a cosmic quest that spans multiple worlds and realities,” said series writer and co-creator J.M. DeMatteis. “Vassilis Gogtzilas’ astonishing visual imagination has challenged me to continually dig deeper and push farther into the rich mythology we’re creating. With luck, Augusta’s adventures will go on for years.”
Each issue will also feature a variety of full-color pin-ups by Vassilis Gogtzilas to keep your mind aloft long after reading!
Carrollian in scope and spirit, THE ADVENTURES OF AUGUSTA WIND is a fairytale for a new generation, where nothing is quite what it seems, and a rollicking caper lies around every corner!
The Adventures of Augusta Wind #1 (of 5) is full-color, 32 pages, and will be in stores in November. Diamond code: SEP 120285.
Posted by J.M. DeMatteis at 4:39 PM 6 comments

Let's celebrate with one of his greatest songs, performed live for a global audience in 1967.  The message remains timeless and true.

THE SANDBOX OF DREAMS

This morning I was sitting at the computer when, suddenly, the Waking World and the Dreaming World merged for, perhaps, five seconds.  It’s happened to me before, several times over the years.  It’s as if the brain misfires and secretes a chemical that’s normally only released when we’re asleep, deep in our dreaming states, and, for a few precious moments, the world in front of us—the one we’re conditioned to believe is real—feels exactly like a dream.  The first time this happened it was disorienting, but as the experience has repeated, I’ve come to welcome it.  This morning I breathed into the feeling, rode it like a wave, let it fill me, exhilarate me.  As I said, this lasted for, perhaps, five seconds and, if it was just a hiccuping neuron or a confused chemical, it really wouldn’t matter and it certainly wouldn’t be worth writing about; but if you’ve been reading my work for any length of time, you know that I’m obsessed with the idea that life really is a dream.  No, for me it’s far more than an idea:  it’s a truth that’s echoed through the corridors of my soul, gaining more power the older I get.

In the early 1980’s someone sent me an audio cassette of a 1956 gathering in Los Angeles:  Avatar Meher Baba—the spiritual master who’s been at the center of my dreams, both waking and sleeping, since I was nineteen—was visiting the U.S. and addressing a group of spiritual seekers.  (Meher Baba didn’t speak:  he took a vow of silence in 1925 and, by the 50’s, was communicating via a unique series of hand gestures.  The gestures were then interpreted by one of his disciples, usually a wise and wonderful man named Eruch Jessawalla.)  Here’s what Baba, through Eruch, had to say:

All this is nothing but a dream. When you are asleep, you find yourself talking, enjoying, sometimes you weep, sometimes you are happy; but when you are awake, you realize the pain and joy that you felt in the dream were nothing but a dream.
Even this is a dream—your sitting with me. The noise of the buses and street cars, this place, the whole city, all of this is nothing but a dream.
Suppose tonight in a dream, you see Baba sitting beside you and explaining, "Do not get entangled in all of this, it is nothing but a dream," then you would question me, saying, "Baba how could it be a dream? I have so many joys and sorrows. I see so many people around me. I see you. How could it be a dream?" The next day, you wake up and you realize that Baba appeared to you in a dream and said it was but a dream.
Even now, at this moment, I tell you that you are dreaming.
The first time I heard those words they bypassed my mind and went straight to the deeps of my heart.  Till then, despite whatever small glimpses of the inner reality I’d been blessed with, the notion that “life is but a dream”—what the Hindus call Maya—was nothing more than a fascinating intellectual concept.  But the recording of that Los Angeles event seemed to carry the authority of Meher Baba’s presence and power.  “Even now, at this moment, I tell you that you are dreaming.”  And I knew it was true.

Years later, I was on retreat at the Meher Spiritual Center in South Carolina and that truth unexpectedly deepened.  For an entire week it felt as if several layers of the Veil of Illusion had been stripped away; the people around me seemed no more substantial than heat trails on a highway or shadows flickering on a wall:  it was all I could do not to put my hand through them.  I remember talking to a friend (who’d spent many years in Meher Baba’s orbit) about this and she said—and I’m paraphrasing—that, yes, it’s all a dream, but the thing that dignifies the dream is God’s presence in it.  It made perfect sense to me.  If I’ve learned nothing else in my life, I’ve learned this:  The oldest cliche in the world is true.  God is Love.  Pure, unadulterated, non-judgmental Love, both awe-inspringly cosmic and deeply personal.  And that Love is what underlies and, as my friend said, dignifies this dream we call life.

I know that, for many people, this all sounds like metaphysical nonsense; but let’s—for a moment at least—imagine that it’s true.  What, if anything, do we do with this view of the universe?  Turn our backs on the dream—as some spiritual paths suggest—diving exclusively inward in hopes of transcending the illusion and becoming one with the Love that underlies it?  Or do we embrace the illusion, exulting in it, dreaming bigger than ever; always striving to remember—and share—the Love at the dream’s core.

I choose the latter.  The goal to me—and I’m sure I’ve said this before—is to become a lucid dreamer; to find union—or at least a conscious partnership—with God within the illusion, molding and shaping it until it’s become the most beautiful dream ever dreamed.
Taped to a bookcase in my office is a message that came to me last year in a dream (I wrote about it here).  Printed in bold, colorful letters, it reads:
This is a dream.  I’m dreaming.  And I can do anything.  I can fly.
Even if it was just the result of a random, misbehaving neuron, the five seconds of overlap I experienced this morning brought that truth back to me in a sweet and powerful way.  It was a reminder to fly high and far.  To play in this Sandbox of Dreams with the innocence of a child—and fill it with as much love as I possibly can.