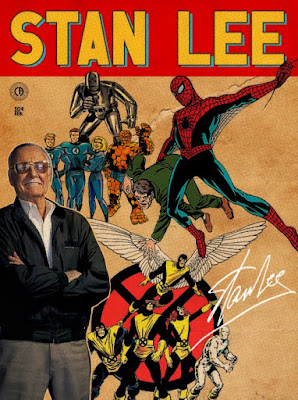 Today is the 94th birthday of the amazing and inspiring Stan Lee.  In his honor, here's a short essay I wrote a few years ago...

Contemporary comic book readers can’t possibly understand how different the 1960’s Marvel Comics were from everything else on the stands.  DC’s comics—for all their imagination and artistic flair—were pristine and sculpted, All-American and squeaky clean to the point of being nearly antiseptic:  no rough edges, no raw emotions, nothing messy at all.  If you looked at the Marvel books, especially in the early days of the line, it was all mess.  The covers said it all:  lurid colors.  Captions screaming for your attention.  Oversized word balloons with thick, black borders around them.  Artwork so primitive it was frightening.  The Marvel Universe was everything an adolescent boy in love with super-heroes and science-fiction could ever ask for.  It exploded my imagination—and I’ve been picking up the pieces ever since.

Happy birthday, Stan! We're blessed to have you!