THE TALE BEHIND THE TALE

This month sees the release of a Brazilian edition of Blood: A Tale.  I wrote a new introduction for the book, looking back on the amazing collaboration that resulted in the creation of what is perhaps the most surreal and unique project of my career (so far, anyway), and you can read it below... 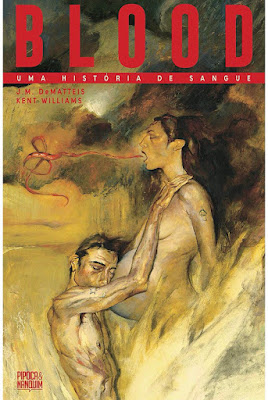 Writers like to pretend we’re the authors of our own stories, but I learned, early on, what a lie that is. No, the story is in charge:  an untamed, heaving, bucking bronco with a mind and will of its own.  Me?  I’m just a cowboy hanging on for dear life.  Try to force the bronco to do what I want and the beast will throw me to the ground, leaving me gasping in the dust.  Surrender to the beast and it will lead me on journeys undreamed of.

This fact became crystal clear to me back in the 1980s when I was working on Moonshadow:  I’d completed the first two issues and they were by far the best stories I’d ever written (thanks, in no small part, to the art and inspiration of my brilliant collaborator, Jon J Muth).  But when it came to the third issue I hit a wall.  Two thirds of the way into the script and the entire story came apart in my hands.  Try as I might, straining mind and imagination to the breaking point, I couldn’t find the right ending for the story and I was devastated.  So devastated I just gave up, stretched out on my living room floor in despair and pondered the inevitable end of my career.  But a wonderful thing happened while I was writhing on the carpet cursing the gods:  an entire new ending came to me, instantaneously, like a holographic movie, projected from the deeps of my mind.  I watched the film, transcribed it, and, to my inexpressible delight, the entire issue came together in a way I never could have planned or imagined.

This wasn’t the first time it had happened, but this particular experience made it clear to me—in a way I’d never fully grasped before—that the act of writing is about a continual surrender to the unconscious:  that mysterious realm that escapes all clear definition and functions as a doorway to both the uncharted vastness of our own minds and the uncharted vastness of Creation itself.  I realized that the more I could get myself out of the way and let the unconscious take command, the better my work would be.  (That’s the old spiritual paradox, right?  You’ve got to give it up to get it all.)

Which brings us to Blood:  A Tale.  Would it be possible, I wondered, to write an entire series this way, consciously writing from the unconscious, letting it all spill out from the deepest parts of myself without control or analysis?  It was an exciting challenge—and, yes, a little frightening—but what would be the vehicle for this experiment?  The answer came not in the form of an idea, but of a feeling:  a kind of tingling in the back of my head.  I could sense a new story there,  but it remained mysterious and elusive, just out of reach.

And it might have stayed out of reach forever had it not been for Kent Williams.

I met Kent through the aforementioned Mr. Muth.  Kent and Jon were good friends—no surprise that these two supremely gifted men would find inspiration in each other’s company—and Kent was kind enough to pitch in on issue #6 of Moonshadow when Jon found himself in need of assistance.  (It’s hard enough penciling a comic book on a deadline, but Moonshadow was thirty pages of fully-painted art that needed to come out every sixty days.  That Muth did it, and so astonishingly well, is a testament to both his talent and his fierce will.)

Working with Kent on that issue was a genuine pleasure—he managed to both mirror Moonshadow’s established visual style and maintain his own identity, no easy thing—and we talked, with much enthusiasm but no specifics, about working on a project of our own.  All the while that idea—consciously writing from the unconscious—was back there tingling away, waiting for something to set it loose.

That something was a sketchbook Kent handed me one day:  page after page of odd, disturbing, fascinating characters that he’d been designing and collecting for years, waiting for the right moment to set them loose them in a story.  I remember flipping through the pages, feeling an strange familiarity—“Yes, I know him!  I know her!  Of course, that’s who he is!”—and realizing that the tingling in my head was now a tsunami, rising, rushing toward manifestation.  Kent’s sketches had unleashed the story-beast slumbering in my unconscious and the creature burst out of my head, knocked me to the ground.  Fed me visions of spiritual search, despair and hope, sin and redemption.  Of looping time, eternal recurrence and stories within stories (within stories within stories).  I started to write, letting the tale pour out of me without filters or expectations:  I wanted to be as surprised by Blood as I hoped our readers would be.

But Blood: A Tale wasn’t just my story:  it was the result of a true partnership.  When we started work on the series, Kent and I were living in the same upstate New York apartment complex and I could literally walk out my door and be at Kent’s place in two minutes.  This made for one of the most unique, and exhilarating, collaborations of my career.  I’d race over to Kent’s apartment with my latest pages, we’d discuss and dissect them, then Kent would go off to paint, following my story but always free to bend and twist it in any way his unconscious mind dictated.  When he was done, he’d come knocking on my door with the finished art for more discussion and dissection, after which the process would begin again.

There were times we inverted the system:  Instead of the writing coming first, the two of us would talk over the upcoming sequence and Kent would go off to paint, often spinning our tale into unexpected places, after which I’d take the finished pages and script over them, discovering new levels and layers of story as I wrote.  I remember sitting together about halfway through the project—it was a few days before I was leaving for my first trip to India—and Kent showed me a page he’d painted for an old story of his, completed but never used.  Could we, he asked, fit this into Blood’s story?  We sat there excitedly throwing ideas back and forth and, within minutes, that single page became the jumping off point for an entire sequence that Kent painted while I was away.

About that trip to India:  In some ways it was as if I’d stepped into the very world Kent and I had been creating.  As if I was walking through the Unconscious Mind of the Universe Itself.  Those two weeks—that felt more like a thousand miraculous lifetimes—echoed and deepened the themes of our story, helping me to bring in new elements (unplanned, yes, but perhaps preordained?) and finding the perfect ending for Blood’s pilgrimage.

And for a truly memorable collaboration.

Working with Kent on Blood: A Tale taught me that all storytelling boundaries are there to be exploded.  That once you’ve consulted your map, the best thing you can do is burn it, throwing away your compass for good measure—stepping onto the path with one foot rooted in mystery and the other rooted in faith.

In writing as in life:  Don’t tell the story, let the story tell you. 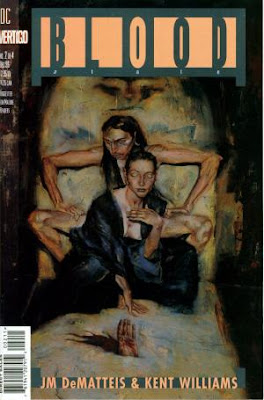