YOU CAN'T ESCAPE THE PAST

Although it was the first of my comics stories to see print, "Blood Boat" wasn't the first one I sold.  That honor goes to a House of Mystery story with an almost unforgivable title:  "The Lady Killer Craves Blood."  (Yes, it's another vampire story.  I wrote lots of them in those days—for the astounding rate of thirteen dollars a page.)  I sold "Lady Killer" in December of 1977, just as I was turning twenty-four, and, as I've said elsewhere, working on DC's horror anthologies (actually, they didn't use the word horror back then, they called them "mystery books") was a fantastic way to learn my craft.  (It helped that I had wonderful teachers like Paul, Jack Harris and Len Wein—who became a mentor to me, encouraging and developing my talent in a way no one else had—showing me the ropes.)  Those anthologies were the vaudeville of comics:  so under-the-radar of the average super-hero reader that I never had to worry about my work being noticed, or savaged, by the fan press.  It was a safe place to try out material, fail spectacularly, and get up again, wiser for the experience.  And a thrilling experience it was:  I didn't care about the money, I didn't even care if anyone was reading the stories, I was working in comics, I was part of the business, and that was what mattered.
A final note about "The Blood Boat":  I actually sold that story three times, taking the basic premise and re-working it into a science fiction story ("Howl" in Mystery in Space #112) and again for a Joseph Conrad-lite saga of the high seas ("The Seas Run Red" in House of Mystery #291).   Hey, at thirteen bucks a page, you did what you had to to survive!
The first page of "The Blood Boat" is below.  Hop on over to CBR for the rest. 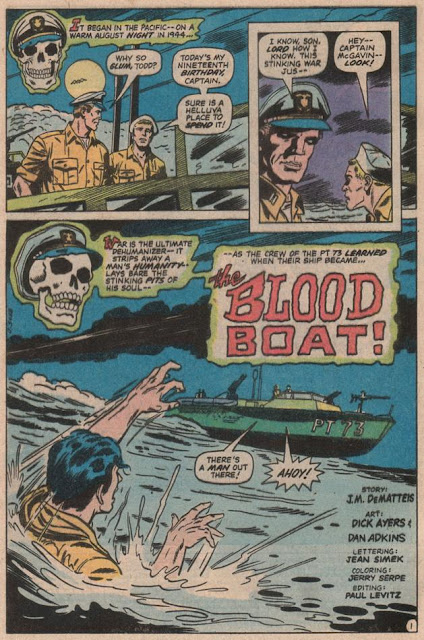